Skip to content
PrevPrevious EpisodeWas Joseph Responsible for Danites? (Part 5 of 9)
Next ExpisodeHawn’s Mill Massacre/Joseph’s Surrender (Part 7 of 9)Next

Table of Contents: Battle of Crooked River/Extermination Order (Part 6 of 9)

Apostle David Patten was the first LDS martyr, killed in the Battle of Crooked River trying to rescue LDS hostages from a Missouri militia. Exaggerated reports that Mormons had wiped out an entire Missouri militia were not true but caused Missouri Governor Lilburn Boggs to issue the Extermination Order which said that Mormons must be treated as enemies and driven from the state. Historian Steve LeSueur gives more details about these events. 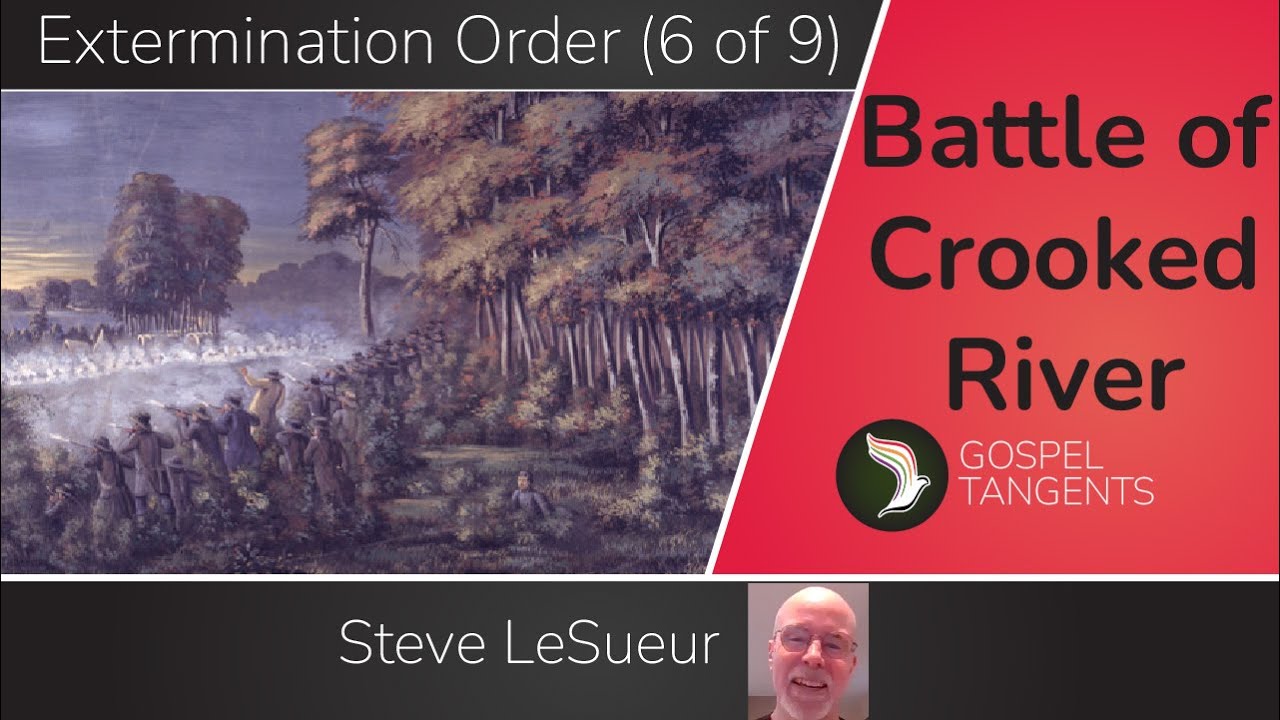 Steve:  While Bogart, who’s really kind of an unprincipled man, he goes beyond his orders and he goes into Caldwell County, as well, and threatens the Mormons there and disarms the Mormons in the southern part of Caldwell County. He captures two of the spies. He knows they’re spies, and he captures them. He captures a third man at the house where they’re staying, and he takes them and there’s some threats of, “Let’s put these guys to death.”  So, other spies who watched this happen, ride back to Far West. and say, “All right, they’ve just taken three prisoners and they’re threatening to kill them.”  So, that’s when David W. Patten raises his force of men. They ride down to Crooked River, where Bogart is camped. You have the Battle of Crooked River on October 25. Again, the Mormons are going down there to free the prisoners.  They’re not going down to attack Richmond. They’re going down to free the prisoners.

Steve:  Meanwhile, the evidence from the prisoners is, “Ah, they’re probably going to be let us go.”  This is afterwards, but the Mormons didn’t know that. Again, Bogart was not a very principled man. So, the Mormons attack Bogart’s troops at Crooked River to free the three hostages. Three Mormons are killed, one Missourian is killed, but the Mormons drive the Missourians from the ground. The Missourians think they’re wiped out.  They scatter. As they’re reporting what happens, it’s like, “I’m the only guy who survived.” But the thing is, that’s what the Mormons thought, too. When you read the accounts of Hosea Stout, and some others, they also thought they just wiped these guys out.

GT:  And nobody died. Well, you said one died.

Steve:  One died, and there were several injured.

GT:  Isn’t this an issue? Was this kind of a ruse to pull the Mormons out? It sounds like you [and Alex disagree.] It seems like, if I remember right, Alex Baugh said that the Missourians had these three Mormon prisoners, and they wanted to draw the Mormons out.

Steve:  They were baiting them?

Steve:  I don’t think so. No, I think, based on the reports they had, that the were truly afraid of an attack by the Mormons. After all, the Mormons had attacked Daviess County. They had heard from Marsh and Hyde, among other dissenters, that the Mormons had violent, aggressive, intentions.  They thought they were just defending against them. They took the spies. They had heard about the spy company. They weren’t supposed to be there, the spies. They had bad intentions. So, yeah, I think they were just operating under their own assumptions of what the Mormons’ intentions were.

GT:  So, you’re saying the Missourians, they have these three spies, and then they were just trying to defend the border?

Steve:  Yes, yeah. Just to be clear, I think two of them were spies. The third person was at the house where the spies were, and so for whatever reason, they took him as a prisoner, as well.

GT:  Okay. Then David Patten attacks and ends up dying in the attack.

Steve:  That’s right. Then, these guys scatter, that is, Bogart’s company.

GT:  But, the Mormon prisoners are rescued, right?

Steve:  Yes. In fact, when the Mormons showed up, Bogart put the men on the front line, apparently, so they’d be shot first, if shooting occurred. One of them was shot and injured, but he recovered and the other two got away.

Steve:  Yes, it’s unclear exactly where he put them, but they were in the front somewhere.

Steve:  The Missourians have all sorts of beliefs about the strength of the Mormons. The Mormons can bring a lot of soldiers to bear. They can overwhelm any one county, easily. So, now with this new information about the battle, they send a new dispatch out, begging, telling Boggs about this. So, now Boggs, he’s already heard about Daviess County and he’s calling out the troops because of reported Mormon burning and plundering in Daviess County He’s called out, like 2500 troops. Now, he gets this other dispatch about the Mormons attacking Bogart and apparently threatening the rest of western Missouri. Then, he issues his extermination order. This is why he says something to the effect of, “Now we’ve received even worse news than we thought,” and it puts everything in a new light. So, now the Mormons must be treated as enemies of the state, and exterminated or driven from the state.

GT:  What day was that order issued?

Sadly this order was a pre-cursor to the Hawn’s Mill Massacre.  Check out our conversation…. 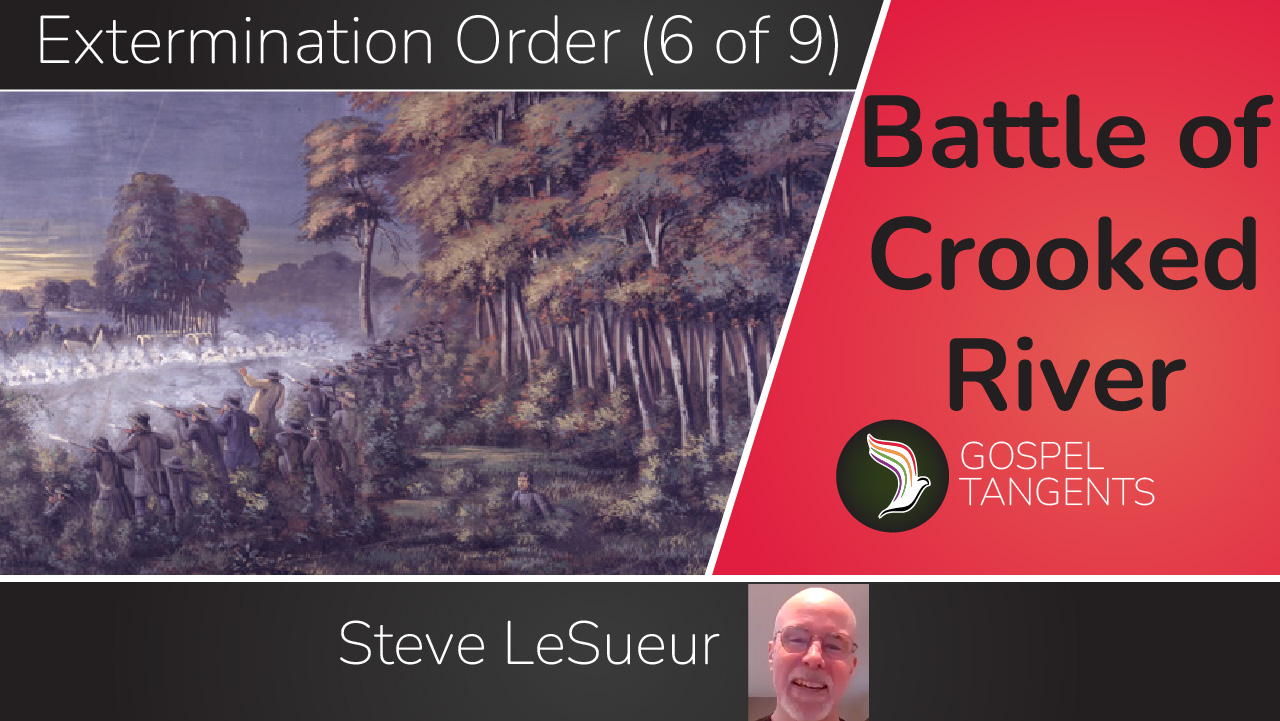 PrevPrevious EpisodeWas Joseph Responsible for Danites? (Part 5 of 9)
Next ExpisodeHawn’s Mill Massacre/Joseph’s Surrender (Part 7 of 9)Next 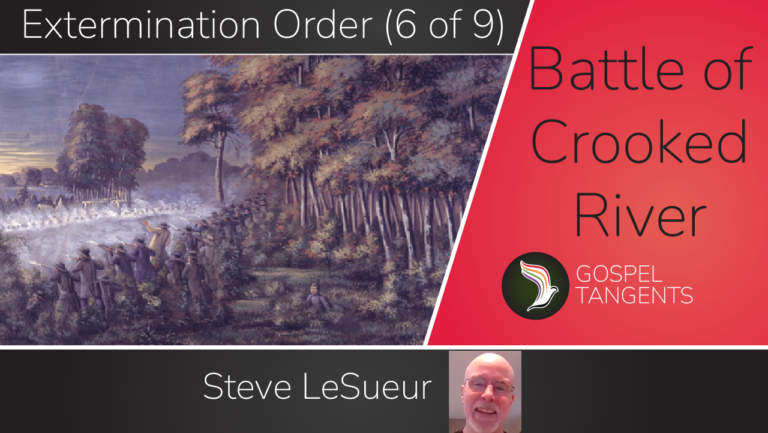