The darkest chapter in Mormon-Missouri history occurred when 17 Mormon men and boys were killed at the Hawn’s Mill Massacre. Hostilities between Mormons and Missouri state militia led Joseph to surrender, and he was actually sentenced to death during a court-martial.  Historian Steve LeSueur tells us more. 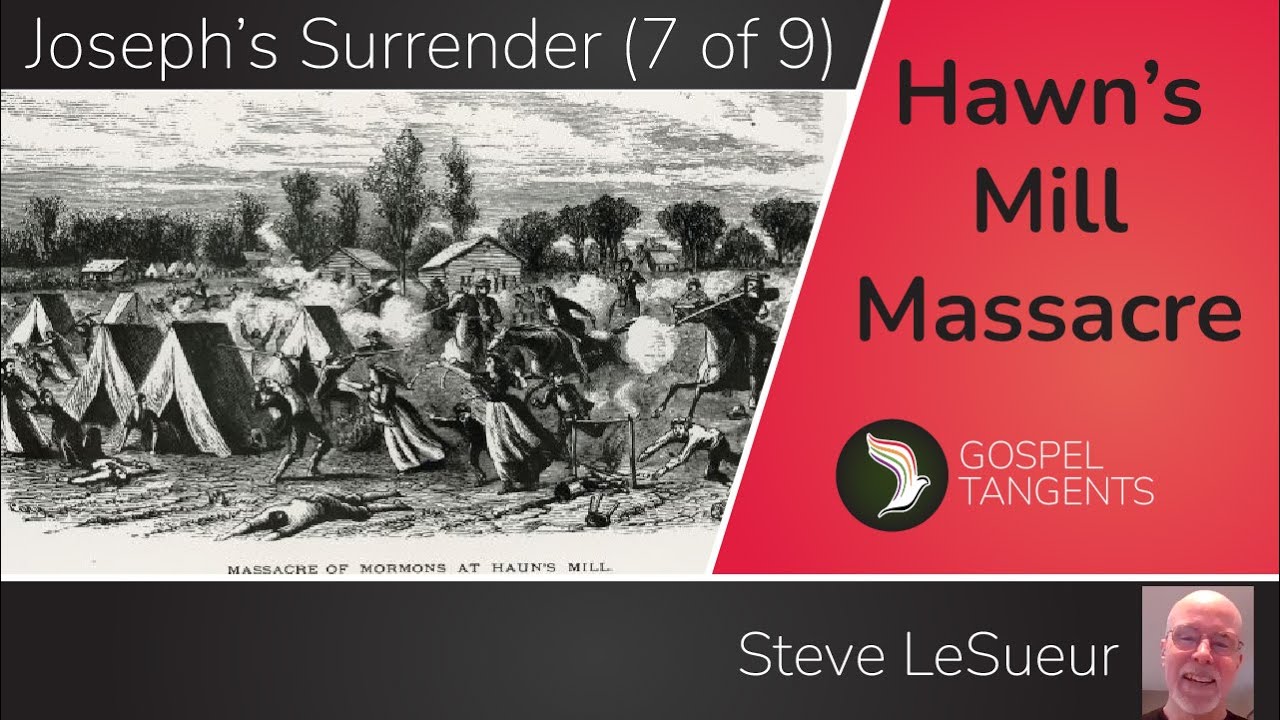 GT:  Can you just give just a brief description of what happened to Hawn’s Mill?

Steve:  The Mormons had a settlement there, and it was on the eastern border of Caldwell County, near Livingston County. So, there were some fears both by the Livingston County citizens and the Mormons at Hawn’s Mill, of an attack by the other.  Apparently, they had signed a truce of, “We won’t attack each other.” The situation was such that the Livingston County people, they were fearful, but they were obviously overly aggressive.  Then, they were also supplemented by citizens from Daviess County, who had been driven out. So, some of the attackers on Hawn’s Mill, were men from Daviess County, who probably were looking for some revenge.  So, you had that going as well.  Again, we don’t know. They never said, “No, we’re looking for revenge,” but, I think it’s a reasonable supposition.  At this point in time, and I think you and Alex talked about this was, Joseph Smith was calling for the Mormons in the outlying settlements to come into the main town. So, in Caldwell, come to Far West, where you’ll be safe. In Daviess County, they called for them to come into Adam-ondi-Ahman, where you’ll be safe, where we have more people. Jacob Hawn came into Far West, and he talked to, I think Captain Killian, and then, Joseph.  He really didn’t get the answer he wanted, which was, “We should stay.”

Steve:  But, now I’m going by memory, Joseph just said some effect of “Well, you do what you want, but I’m telling you to stay here.” Then, he went back, Jacob Hawn. According to one account, I read [that] one of the men from Hawn’s Mill, said, “He came back, and told us Joseph said we could come back. But the way Hawn portrayed the message, it was as if, “You can come back, but you would be cowards to do so,” and so they stayed, and this is just one person.

Steve:  Yeah, yeah. The Livingston troops, of course, they had no reason to attack. I mean, there was no threat from that village at all, and [the vigilantes] pretty much wiped them out: 17 killed and quite a number wounded as well. Seriously.

Steve:  For a long time, it was believed, or it was asserted by Mormons that they [the attackers] were just responding to the Extermination Order. But the order had not reached there, and they never gave that reason for doing that. Those who did speak about it argued that, “We thought the Mormons were going to attack us and so we attacked them first.” Whether they really believed that or not, again, we don’t have any contrary evidence, but we do know, they certainly had no reason to attack. They had no [reason. The Mormons attacking them] wasn’t going to occur. But maybe they were persuaded by the Daviess citizens or other events.

GT:  Do we have any reaction by Boggs to the Hawn’s Mill Massacre?

Steve:  You know, that’s a good question. Not that I recall, but I won’t say no. When somebody visited him, a Mormon, with some petitions, Boggs did express a lot of concern about the conditions of the Mormons, but I think this was in Far West. Also, the Mormon who recounted this didn’t really believe Boggs. He thought it was more of crocodile tears.

Steve:  So, after Joseph comes back to Far West, and there’s the Crooked River Battle and the Extermination Order, and the troops come out. Several men, Reed Peck, and John Corrill and some others volunteered to go talk to the Missourians and find out what’s going on.  Eventually, it ends up there’s five of them that that go out representing the Mormons. They go and they meet with General Lucas, who is in charge of the troops. He’s from Jackson County, by the way. So, here’s somebody’s not sympathetic to the Mormons. They’re just going out to find out what’s going on. What are your orders here? Lucas, gives them four demands.  He says, “Well, first of all, you’ve got to give up your arms. Second, you’ve got to surrender. Give up your arms, you’ve got to surrender all of the people who were involved in the Crooked River Battle,” because a Missourian was killed. So, these were state troops. “We want to prosecute these people, and your leaders have got to be given up as well. Then, get ready to leave the state.”  These five Mormon men, “Well, wait a second. You can’t make us give up our arms.” I think I should have looked this up before our discussion here. But I think he says something like, “You’ve got 30 minutes,” he says, “to agree to this.” He says, “If you need more time, then what you have to do is you have to give up these five men as hostages.” He names Joseph Smith, and Sidney Rigdon, and Hyrum Smith, and Lyman Wight,

Steve:  and somebody else. He says, “You’ve got to give these people up as hostages while you make your decision, then you have till tomorrow,” he says. “If you want to fight to get your hostages back, we’ll give you back Joseph Smith and you can fight. But otherwise, you’ve got to do that now because I’m going to attack in 30 minutes.” So, these five commissioners, as we call them, they were negotiators, whatever you want to call them. They didn’t negotiate, you know, they were just given an ultimatum. The five men were George Hinkle, WW Phelps, John Corrill, Reed Pack, and a man named Morrison. Arthur Morrison, I think was his name. They run back. And they’ve got to tell Joseph, all of this stuff.

Steve: By the way, it is Joseph in charge. They’ve got to tell Joseph. So, there’s some discussion. Based on what the discussion was, the Mormon leaders, they knew exactly what Lucas was asking for. They were not betrayed. They were not tricked into going there. They knew what was at stake. The only thing that they didn’t know was they thought they would be able to go and negotiate with Lucas about these terms. That appears to be what they thought. But, in any case, they didn’t have much time. While they’re doing this discussion, Lucas was already setting up his cannons and his troops and lining them up. He was ready. He was going to attack. So, I’m sure these commissioners, these five men, were saying, “Come on.” So, the five men/the hostages go out. Again, they knew they were hostages. People back in Far West knew they were hostages to be released the next day if they wanted to fight. So, they go out there.

Steve:  But, Lucas doesn’t negotiate with them. He just immediately said, “Alright, you’re my prisoners. You go sit over there.” They don’t get to talk to anybody. They just get to sit there in the rain all night and listen to Missourians howl.  But, again, the Mormons knew what was going to happen, because among the things they did, is they went and they [were told,] “Go get the Crooked River boys,” all of those who fought at Crooked River. “They’ve got to get out of town.”  So, that’s what many of them did. So, you had Charles Rich and others leave in the middle of the night, sneak out of town and get away. Why? Because they knew they were going to go on trial. So, then the next day comes, and the hostages are given their choice, “Do you want to fight or not fight?”

Steve:  Well, they could see what was going on. They could see all the troops. So, they decide to surrender. But it wasn’t George Hinkle who negotiated those terms or set those terms. It wasn’t him who said that we’re not going to fight. It was Joseph. But the way things turned out, the Mormon hostages, Joseph and the others thought they had been betrayed, that somehow this is what Corrill and Hinkle and the others have negotiated. But, no. The terms were just dictated to them. Hinkle and Corrill, they had no more choice over what the terms were than Joseph did. But Joseph saw the handwriting on the wall that Far West and the Mormons would have been wiped out, lots of deaths, so, he surrendered.

GT:  Okay, and this is what day? Do we know?  This is November, I believe.

Steve:  November 1st was the day of the surrender. So, October 31 was the day the troops showed up, and the hostages went out, and then, overnight to the November 1. By the way, news of the Hawn’s Mill Massacre had reached the Mormons.

Steve:  Before they went out as hostages, which was sort of another indication of…

Steve:  Then, I can’t remember if you and Alex talked about this, but then General Lucas subsequently held a court-martial of the prisoners, considering them military leaders. He court-martialed them and sentenced them to death, and then asked General Doniphan’s troops to carry out the sentence.  Doniphan refused. A member of his troops, Peter Burnett, also recounts this and says the men in Doniphan’s brigade came to him and said, “We’re behind you on this.  We’re not going to do this.” Lucas, by the way, then later denied that he ever did such a thing.

GT:  Well, I know that’s in Sunday School manuals where Alexander Doniphan is, lauded as a great hero for defending Joseph Smith’s life in that situation. I’m trying to remember. They even quote what he said to Lucas, “You know this is illegal and I will hold you responsible.”

Steve:  Lyman Wight tells an interesting story, too. He says that one of the officers came to him and said something to the effect of, “Listen. It’s just Joseph we want, just Joseph Smith.”  He says, “If you’ll swear against him, we’ll let you go.” Lyman Wight says, “No way. Shoot and be damned.”

What are your thoughts on how the Mormons were treated in Missouri during this time? Check out our conversation…. 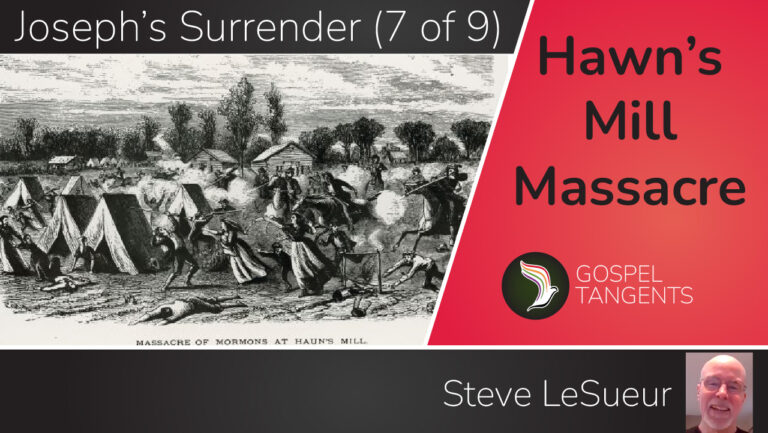