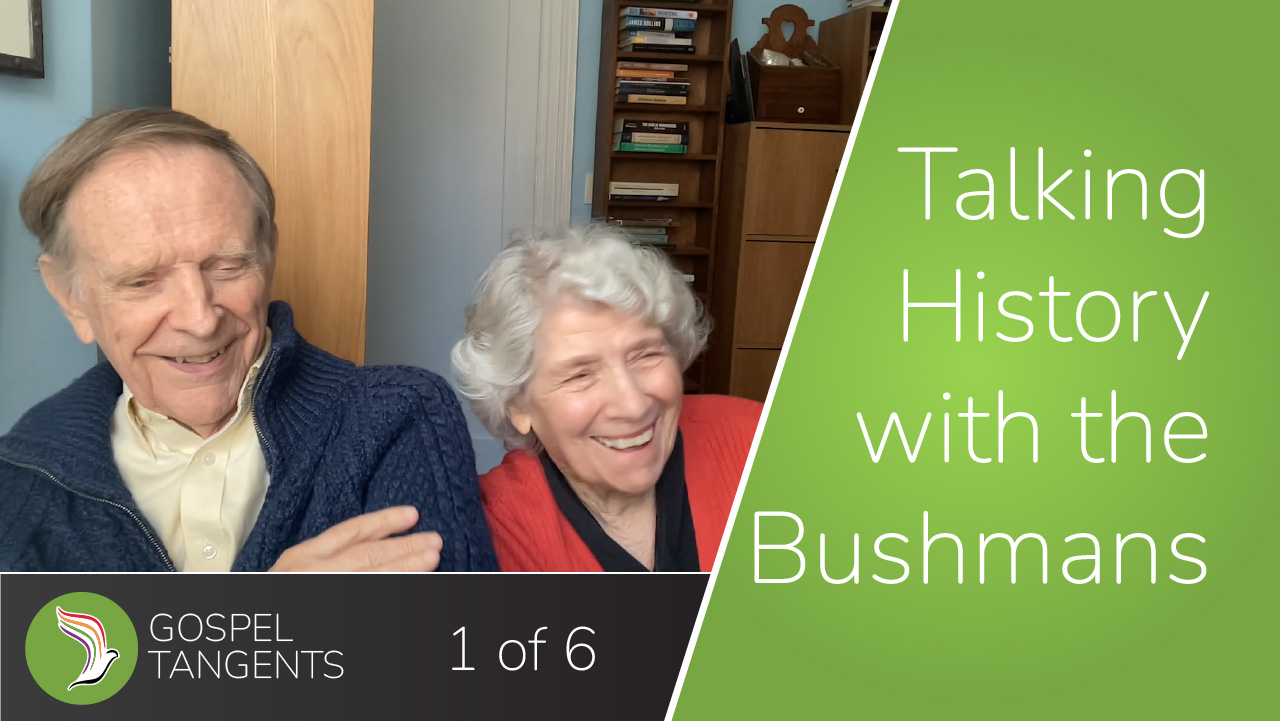 I’m excited to introduce a pair of amazing historians:  Dr Richard Bushman, and his wife, Dr. Claudia Bushman. We’ll learn more about their backgrounds in Mormon history.  Claudia is the incoming president of the Mormon History Association meetings coming up next month in Logan, Utah. She’ll give us a preview of the conference.

Claudia:  About the Mormon History Association, I can say a number of things. I think, this it the 57th or the 67th year. I think it’s the 57th year of this operation. I mean, it’s been going on for a long time. Leonard Arrington started it with a number of people, Richard was one of them. But, of course, in those days, it was not considered suitable that people like me, females, would go to such a thing. So, I stayed home, but heard all about it.  It was gathering people who were doing Mormon history, and also people who were interested in Mormon history. We’ve had this annual conference ever since.  This year, seeing as the President has something to say about it, we’re including quite a bit of our cultural history, as well as our religious and political and other kinds of history. So, we’re opening with a concert, which will be very nice, choral, String Quartet, the music of Leroy Robertson. Then, we will also have art exhibitions, several, and we will also have quite a few panels that talk about arts, and that’s read very broadly, written things, painted things, created things in many other ways. So, anyway, that’s my great contribution is that I said, “Well, if I’m going to be president, we have to do some cultural history, as well. It’s going to be great.

GT:  Nice.  Now, remind us, for those people who don’t know, when is it and where is it?

Claudia:  This is going to be at Logan, Utah, which has been wanting the Mormon History Association to come back for some time. They have a lot of fans there, and it will be in June, from the evening of June 2, to June 6. That will include an after-conference tour, as well as all the events that are taking place at Utah State University, which is a very ideal location for us with all those classrooms. We have more panel discussions this year, more speeches than have ever been on the program before. So, we’re growing in lots of ways.

GT:  Do you have to be a member of the Mormon History Association to attend?

Claudia:  Yes, you have to join up to attend, and you have to pay a membership fee and a conference fee. But, it’s well worth it, of course.

GT:  I think you can actually attend and not be a member, but it makes sense to become a member, because it’s just the same price, basically.

Claudia:  This is a group that thinking people and just people, in general, really enjoy being part of and come back year after year.

GT:  It’s my favorite conference. I always rank Mormon History Association, I put that as number one. I put John Whitmer as a close second, and then Sunstone kind of a distant third.  But, I love them all. So, this is fantastic. Can you give us a preview of the conference and what people should have to look forward to?

Richard:  One of the speakers at lunch is Laurel Ulrich, who you may know, is a very eminent Latter-day Saint historian, and she’s begun working on her upbringing in a small Idaho town. She is going to talk at lunch about her life growing up as a girl in Idaho. Jared Farmer is also going to speak.  He’s the one who wrote the book about Mount Timpanogos on Zions Mount.  He’s a marvelous ecological historian. Then, we have a distinguished lecturer from Yale who’s coming in to give a talk on a short history of the Mormon smile.

Are you going to attend?  If you’ve attended, what are your thoughts? Check out our conversation….