PrevPrevious EpisodeClaudia’s Focus on Women in History (Part 4 of 6 Claudia Bushman)
Next ExpisodeIs LDS Art Getting Better? (Part 6 of 6)Next

Why Do Some Scholars Get in Trouble (Part 5 of 6)

Some LDS scholars get in trouble with Church authorities: Michael Quinn, Maxine Hanks, Lester Bush, to name a few.  Yet others like Dr. Richard & Claudia Bushman can write about controversial topics and not get into trouble.  Why is that?  I asked Richard & Claudia their answers to these questions. 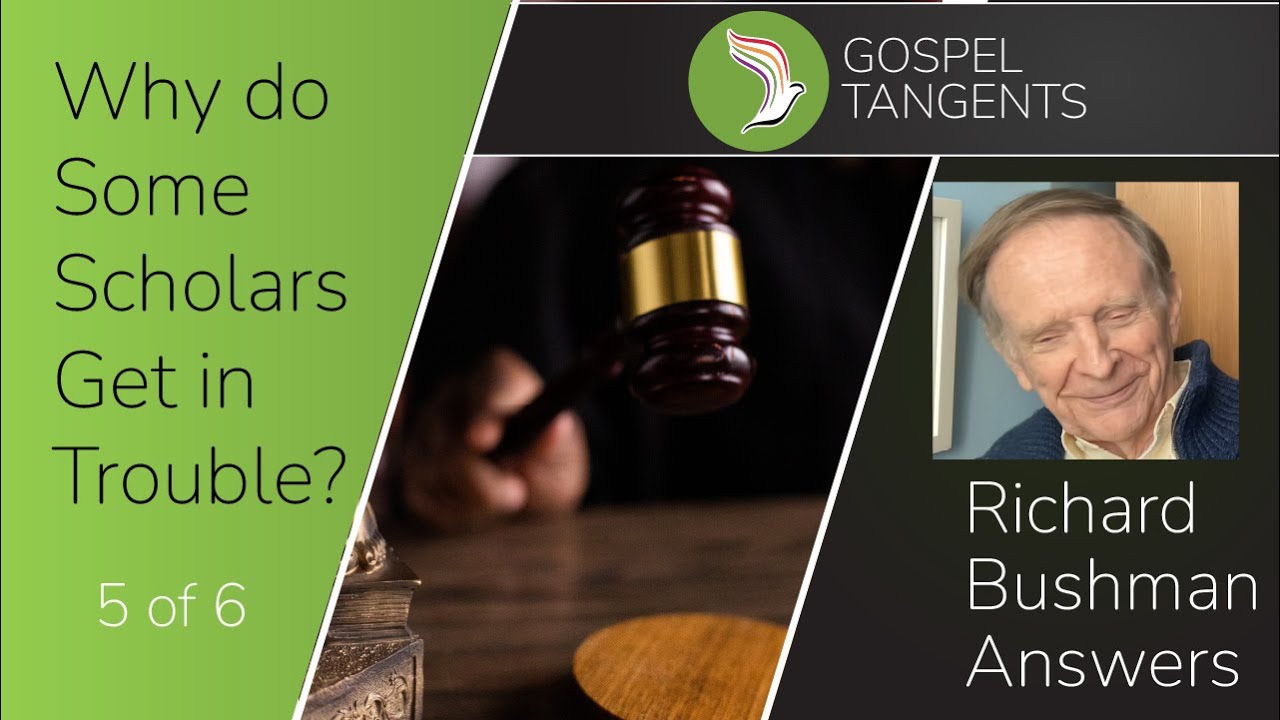 Scholars Get in Trouble

GT:  So, I have a question for both of you, especially because you know Leonard Arrington and you know, Eugene England. I look at people like Lowry Nelson. I don’t know if you knew him, from Utah State. Even, Lester Bush, it seems like certain people get in trouble. Michael Quinn is another one. [They] get in trouble for writing certain things. But there’s other people like you two, Greg Prince, Terryl Givens, people like that, that can write very similar things, but you don’t get in trouble. Can you talk about why some people get in trouble? Some people don’t.  Do you toe the line better than Michael Quinn? How does that work? Or is it just luck of the draw? Or how does that work when you talk about sensitive issues with the Church?

Richard:  Well, it’s a good question. My slogan is keep your heart pure, and let your mind run free.

Richard:  That is, if you can purge out any desire to tweak the Church, to sort of correct the Church, and just desire to really say what you believe is true. That’s hard to do. A lot of people think they’re doing that. But, you can always sense in their writings, a desire to trouble people. I wouldn’t say that’s true for everyone who gets in trouble, but I’m just saying, you have to have a good attitude. Then, in my case, of course, I was taking all the Church jobs that came along. So, the fact that I was a bishop and stake president and now I’m a patriarch, sort of reassures people that my heart is in the right place. Because I think that’s what the Church leaders are most interested in. Are you really loyal to the Church? And that’s a hard thing to judge. Probably, people are misjudged on that count. But, that’s what I have to say on that subject.

GT:  Does it help that you didn’t live in Utah? Did you have a little bit of a buffer, because you were in Boston and New York?

Richard:  Yes, it helps a lot. The trouble is, if you live in Utah, you write, aware of General Authorities looking over your shoulder. You can’t do that.  You can’t write to please the General Authorities. You’ve got to write what you think is true. It’s just very hard to do in Utah, because there’s such a presence. You say you’re writing a book, or doing this or doing that, and they always want to know, “What do the brethren think?” And if you just get that in your head all the time, it’s very hard to think clearly. So, I’ve done most of my writing in Boston and New York, and it’s been much easier. Also, when I write, I don’t I write just for the Church. I always write for people outside the Church. I always want to talk in a way that–I often imagine myself giving a talk to the faculty at Colombia, and what could I say about the Church, say it in a way that would make sense to them. So, it helps that way, too, to be in another society where you’re aware of other demands.

GT:  Claudia, do you have any thoughts there?

Claudia:  Well, I think–I’ll do anything if they tell me straight out that I’m not supposed to do something. I won’t do it, and that’s happened a few times. But, I don’t think that–I have never been in the business of criticizing the Church. I don’t want to try and reform it. I don’t threaten to leave if they don’t do something or other. That doesn’t mean I agree with everything that goes on, but, I just think there is no point in fighting authority in that way. So, I just don’t do that. I know there are a lot of people that are dubious of the things I say and do. But, on the other hand, I’ve done an awful lot of things for the Church, too.  Lots of my projects are very devoted and so on. I have no desire to leave the Church, even if I’m not ever going to change it or reform it. It’s very important to me.

GT:  I think Lavina Anderson felt the same way. They kicked her out anyway.

Claudia:  I feel very sad to see people feel that they must resign in the Church. It’s unfortunate in every way. I think we can live with it. I mean, also, I feel like I have a great deal of power in that Church. I don’t have the priesthood. But, I’ve got a lot of [influence.] Things I say make a difference to the local people as well as to myself. I don’t feel bad about my position in the Church.  I’m a good member, aren’t I?  I pay my tithing.

Richard:  Claudia’s view is if you’re discontent with your position in the Church, ask yourself, “What would you like to do in the Church?” And when you’ve figured that out, then just do it.

What do you think of their responses about how scholars get in trouble? Check out our conversation….

PrevPrevious EpisodeClaudia’s Focus on Women in History (Part 4 of 6 Claudia Bushman)
Next ExpisodeIs LDS Art Getting Better? (Part 6 of 6)Next 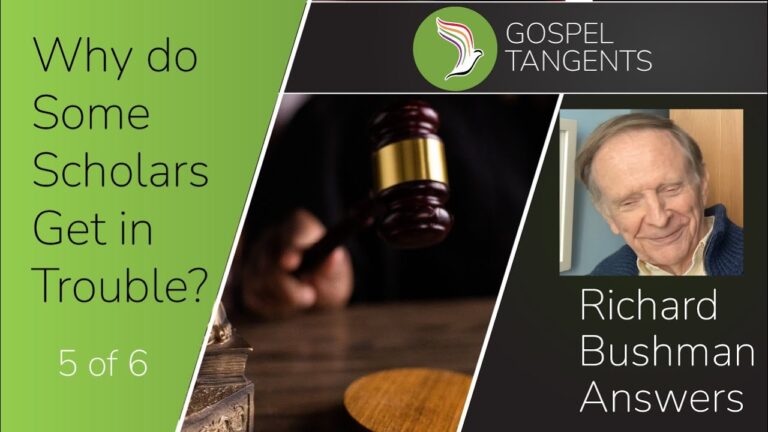