Yesterday was President Monson’s funeral.  When an LDS President dies, the First Presidency is dissolved.  Have you ever wondered why that is the case?  Historian John Hamer and apostle Lachlan MacKay of the Community of Christ will talk about why that happens in the LDS Church.  It’s a really interesting conversation as we discussion several succession claims.

John:  One of the last acts that Joseph Smith does before going to Carthage is he had given another one of these special blessings to Joseph III and several of these where Joseph had been prophesied at one point or another that he would be in his father’s role in being prophet, but he was what?  He was eleven?

Lachlan:  Eleven or eleven and a half.

John:  He’s eleven, so ok.  He wasn’t going to be the successor at that point.  What I argue, I think anyway, I think that the person who had the best claim at the point, in terms of both civil, and canon, which is to say church rules and law is Sidney Rigdon, who even though he’s been a little on the outs, he is still actively campaigning as the vice-presidential candidate in Joseph Smith’s U.S. presidential election.  So Joseph Smith then Sidney Rigdon; Sidney Rigdon is the only guy left in the First Presidency.

Even though in the LDS tradition, there is this idea that the First Presidency dissolves, and then the senior most apostle always succeeds, the only reason that is the idea is because they didn’t want to have Sidney Rigdon be in charge.  It doesn’t say that in the Doctrine & Covenants or anything like that.  There’s no canonical, there’s no canon law that says anything of the kind.  The First Presidency had been a completely distinct [quorum] in the early church tradition from the Twelve.

Lachlan:  There’s nothing that says it dissolves.

John: There’s nothing that says it dissolves and also not like the First Presidency is just like three more of the Twelve or something like that.  It’s a completely distinct [quorum.]  Anyway, so what I say is Sidney Rigdon is the last surviving member of the First Presidency and then according to the actual incorporation like we’re talking about the Church’s possession, William Marks had signed it over to Joseph Smith on behalf of the Church.  The Church is incorporated in the state of Illinois, and part of incorporation and the documents in Carthage, it says held by Joseph Smith as Trustee in Trust for the Church and my successors in the First Presidency.

GT:  James Strang created a First Presidency and said that should be the successor?

John:  Yeah, he did that at that point.  But before that, I’ve got to dial it back.  The person who was the surviving member of the First Presidency then is Sidney Rigdon.  Sidney Rigdon gets outmaneuvered in this showdown between Brigham Young and Sidney Rigdon.  He gets kicked out of Nauvoo, or flees for his life and he goes back and reorganizes and creates a new headquarters of the church in Pittsburgh.  But at that point, he suffers one of these things that all kinds of schismatic Mormon Latter Day Saint heritage churches do which is, then they start asking themselves:  where did we go wrong?

We will also talk about some of the other leaders who wanted to take over leadership of the LDS Church in the early days.  There’s a lot more people than you may recognize.  I also encourage you to check out the video.  John was kind enough to share some slides about the Succession crisis, and I have included them in the video.  Don’t forget to check out our conversations with Greg Prince and Jim Vun Cannon on the Succession Crisis.  Check out our conversation….. 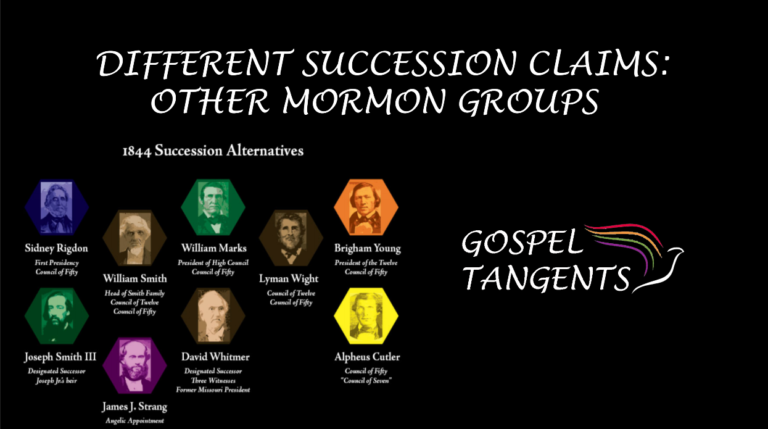