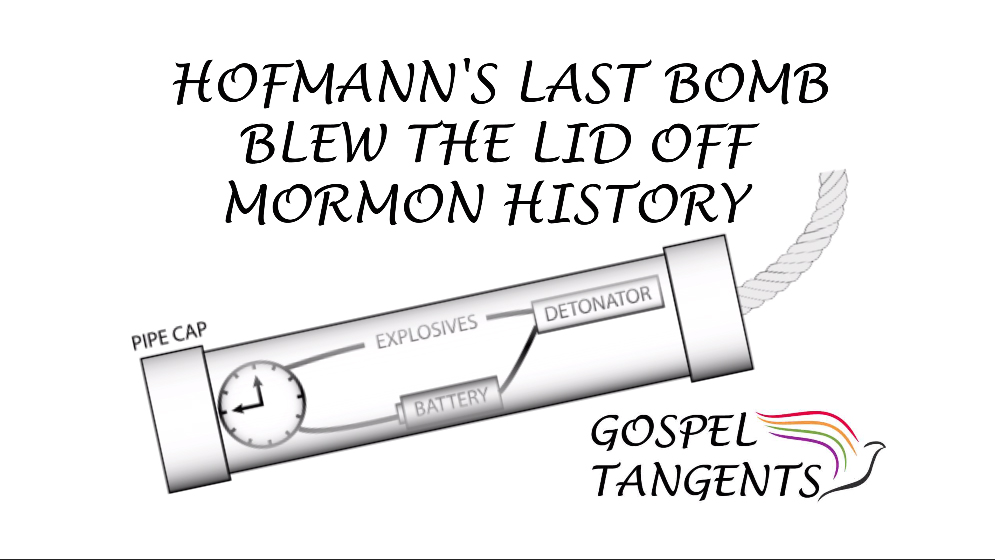 In 1985 Mark Hofmann’s last bomb blew himself up with his own pipe bomb.  Shannon Flynn, a good friend of Mark Hofmann describes what bystanders did to save Hofmann’s life.  It’s a pretty interesting story.

When Mark had been blown up, he was lying in the street, and I’ll give another little strange [story.]  This whole thing is just too weird.   There were some people in the area that saw that happen.  Several of them ran over to him.  There was a fellow by the last name of Christensen who saw that and went over.  Mark’s shirt was torn a bit and he could see garments, so he knew that guy [Mark] was a member [of the LDS Church], pulled out a little vial of oil and gave him a blessing that he would live.  Well he did live.  I’ll let you all think about that one.

What do you think about blessing a criminal to live?  Did God honor that blessing?

But that bomb didn’t just severely injure Hofmann, it blew the lid off Mormon history.  We’ll talk about the Salamander Letter and the magical world view, and how that really changed things for Mormon history.

As an example, the Salamander letter, people said that’s going to ruin the church.  That completely goes against the standard history of the church.  It did go against the basic juvenile understanding that most members have of the church, but that particular concept of salamander or toad, he actually took from Mormonism Unvailed.[1]  The concept of Joseph being prevented by that, he took it from a Jesse Knight diary.  At the end of the day, it was new information, more, but down the same track.

[1]Mormonism Unvailed was the first anti-Mormon book, written in 1834 by E.D. Howe.  Dan Vogel has written an annotated copy of the book, complete with footnotes reverencing Howe’s claims.  See http://amzn.to/2fOpjU7

It turns out that home of Hofmann’s forgeries ended up in some scholarly books.  Dean Jessee published a book called The Personal Writings of Joseph Smith in 1984 that unfortunately contained some Hofmann forgeries.  In 2002, Jessee published a 2nd edition of The Personal Writings of Joseph Smith that removed these forgeries.  Second edition is available at http://amzn.to/2fVPuM9  .  You can listen to Curt Bench’s interview discussing the errata at https://gospeltangents.com/2017/05/22/updated-salamander-letter-podcast/

FAIR Mormon notes one of these forgeries was in both Dean Jessee’s book, as well as Michael Quinn’s book, The Mormon Hierarchy: Origins of Power (Signature Books, 1994).  Jessee had included (and Quinn referenced Jessee’s book) that a Hofmann forgery was incorrectly included where Joseph allegedly wrote a letter to Jonathan Dunham asking the Nauvoo Legion to rescue Joseph from Carthage Jail.  FAIR notes “Deseret Book and Dean Jesse had also released an errata sheet for his Personal Writings of Joseph Smith, which was available by DATE. [citation needed].”  Date is probably around 1986-1987 when Hofmann was sentenced to jail.  See https://www.fairmormon.org/answers/Question:_Did_Joseph_order_Jonathan_Dunham,_head_of_the_Nauvoo_legion,_to_rescue_him%3F retrieved 5 October 2017)

What are your thoughts regarding Hofmann’s forgeries?  Are you surprised that Quinn’s book still contained the forgery as late as 1994?  What do you think God’s reaction was to the blessing Hofmann received?