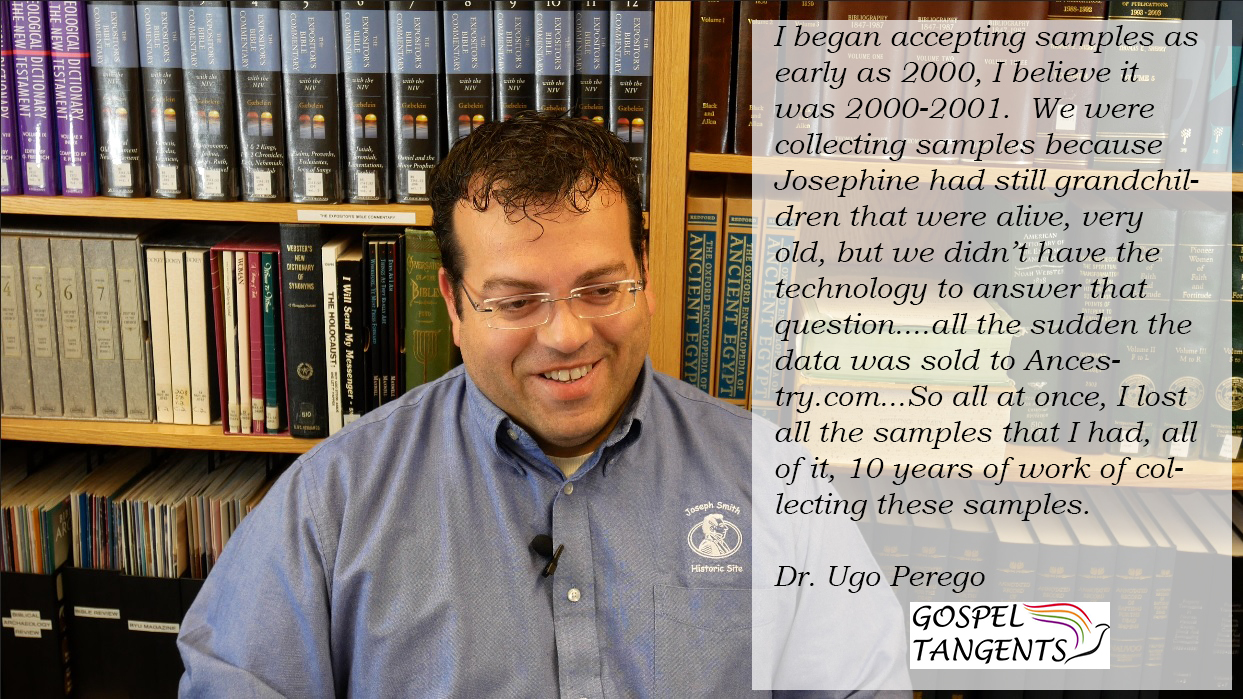 We’re continuing our discussion with Dr. Ugo Perego.  Last year at the Mormon History Association meetings he made a lot of news when he announced the official test results of his test on paternity of Josephine Lyon.  Sylvia was married to Windsor Lyon but sealed to Joseph Smith, and there has been some question as to whose daughter she really was.  Was it Windsor or was it Joseph?

[Josephine] does not have the Y-Chromosome with Joseph Smith.  That’s all I had to play with.  I only had a very accurate Y-Chromosome profile and I used it to answer six cases of sons.  Five of them were published.  One of them is not published; actually there are two of them that are not published but one of them is a little bit iffy.  I don’t know if it will get published or not.  Don Bradley was the one that was working with me then.  We kind of dropped the ball on it, and now I’m doing another one, the one I was [talking about] yesterday.  They are all sons, Orson Hyde, you know the one I told you?  They are all sons, Y-Chromosome.

GT:  Can you briefly mention who these sons are?

Then we have Mosiah Hancock; Mosiah, Oliver [Buell], Moroni [Pratt], Orrison [Smith], and the fifth one is?  I can’t remember the fifth one. [It was Zebulon Jacobs. [1]]

Problems with the Test

But when it came to testing a possible daughter, Dr. Perego ran into some big problems when testing Josephine.

I had 120 descendants of Josephine that gave a DNA sample and their genealogy.  I knew how they were connected.  Josephine had a lot of children and I had many different lines represented, very beautiful results of family.  It would make a great genetics study, but not technology to do it.  We were stuck at the Y-Chromosome and mitochondrial DNA at that time.

Then when the technology finally started coming around, all the sudden the data was sold to Ancestry.com and I was given word at that time by some individuals that were involved with that process that I could still access that information, that data that was moved.  Because these are samples that were collected and frozen but not the genetic data has been produced so you still need to run the data.  It’s not as if I have the data saved on a hard drive.  We didn’t have the technology to run and process that data yet.  So all at once, I lost all the samples that I had, all of it, 10 years of work of collecting these samples.

GT:  Because the company was sold.

Ugo:  The company was sold.

GT:  Oh that must have been heartbreaking.

Ugo:  It was.  So at that time, two things happened.  I lost control of the data.  It was given to Ancestry.  Very soon I understood that it was going to be very difficult.  I tried a lot of different approaches to get the data back.  In the meantime, I’m no longer working with Sorenson.  Sorenson Company doesn’t exist anymore.  I do not have access to a lab through them anymore, and I’m relocating to Italy, so I had a start anew everything with my family in a different country.  It’s been probably 2, 3, or 4 years that I absolutely did not even touch this case study anymore.  I mean I had no data, right?  What do I do with it?

There’s not much I really can do, so finally she actually wrote me a letter to Italy, and I got this letter, and she’s like, “we really want to know, what is it going to take?  Can we talk about it?  What is it going to take about money, samples?  Who’s going to run them if we get the samples?  Can you be our researcher for this?”  So at that time I became their personal researcher.  I gave my free time, my expertise and they paid for the testing.  I told them we’re going to build it, what we didn’t have.

GT:  You had to rebuild what you didn’t have.

(Don’t forget to listen to our previous paternity test!)  Check out our conversation…..

[1] Digital version can be found at http://digitalcommons.usu.edu/cgi/viewcontent.cgi?article=1078&context=mormonhistory Retrieved Sept 3, 2017

[3] Digital version can be found at http://digitalcommons.usu.edu/cgi/viewcontent.cgi?article=1078&context=mormonhistory Retrieved Sept 3, 2017