Skip to content
PrevPrevious EpisodeBoM Geography: From Middle East to Africa (Part 1 of 6)
Next ExpisodeBoM: South America, Heartland, Meso (Part 3 of 6)Next

GT:  The next theory that’s definitely different is the Malay theory by Dr. Ralph Olsen. Ralph passed away about five years ago, unfortunately. I actually spoke with Ralph before he passed away. This is a really fun theory. I know a lot of people will look at this theory and say, “Asia? Southeast Asia? How can this be?” But, one of the nice things about this is, number one, you’ve got a north/south orientation on a peninsula here. So, it kind of matches Mormon’s Map that we mentioned a few slides ago with Dr. [Sorensen]. The word Thailand means land of the free. We talk about the Book of Mormon being–or in the Book of Mormon, it mentions that America will be, or the Promised Land; I shouldn’t say America.  It never says America.  The Promised Land is a land of liberty. This area has never been colonized by any of the Western powers, so that could be a case where you could say, “Oh, I did not know Thailand means land of the free,” but that’s kind of interesting.

GT:  K.C. Kern did a four part review of this theory on Wheat and Tares [blog]. I’ve got a link there, if you’d like to see. So, this could include modern day Thailand, Malaysia and Burma. I’ve actually got an interview with K.C. coming up in about a month, and we’re going to go into a lot more detail than I’m going in this presentation. But, the thing that I like about this is a lot of the anachronisms that the Book of Mormon critics complain about [including] gold, horses, elephants, that sort of thing, disappear completely with this theory. So wheat, barley, has been used in the right time period. Dr. Olsen’s first manuscript is called The Malay Peninsula. I’ve actually got it on my website. Voni Rivas is Ralph’s daughter. She’s on the call here tonight. She gave me permission to put this on my website. So, if you’re interested, this is a kind of the free version of the book here. You can purchase the book there, but the free version is now on my website. That link there. The website is down right now. Voni is trying to get it back up.

GT  22:24  The Baja theory: I interviewed David Rosenvall, him and his dad. His dad was a geographer. I think he was at BYU, if I remember right. You can see his website there. http://achoiceland.com. I’ve got the interviews. I interviewed him a while back. He basically believes the Baja Peninsula [theory,] which is, of course, just below Southern California, and across the bay there from mainland Mexico. Once again, it has a north/south orientation. So, that seems to be a benefit. It’s got a similar climate to the Mediterranean, a lot of times. Nephi says that they took seeds with them, and the seeds grew. They probably wouldn’t grow very well in New York. But, being a Mediterranean climate, theoretically, these seeds would have grown. David also says this is compatible with the Mesoamerican theory. He says that maybe they started in Baja and then perhaps migrated over to mainland Mexico. The peninsula matches, the distances match. He says there are no anachronisms. I take a little bit of issue with that. I’ll talk about that in just a moment.

GT:  The Book of Mormon and early church leaders said the Book of Mormon was about the inhabitants of this continent. So, that would be another advantage there. One of the things that David has done is he says that there are some similarities between Uto-Aztecan language and Semitic languages, and so they’ve done some research on there. I think we need to get some more on that. But he thinks that there are elements of Semitic languages in Aztec languages.

GT:  Some of the cons: the biggest is that he said that there are no anachronisms. One of the claims is the elephants, horses, plants are found here. The problem is the elephants, and the horses are found in the La Brea Tar Pits, which are in the Baja Peninsula. But the carbon dating dates those to the last Ice Age, which is 10,000 to 20,000 years ago. So, yes, there were elephants. There were horses. But we haven’t found anything that dates to the time of Lehi. So, that’s one of the problems. But, yes, there have been some things found in the La Brea Tar Pits.

GT: Another theory that’s kind of a fun theory is kind of this New York/Great Lakes theory. The one that I’m familiar with, is, can be found at http://Bookofmormongeography.org. With this theory, it’s kind of a limited geography theory in the fact that, basically, it that takes place among the Great Lakes.  You can see between the lakes [a narrow neck of land.] Those lakes could be called seas. The Dead Sea in Israel is much smaller than the Great Lakes. So, if you refer to the Great Lakes as seas, you could argue that.  You’ve got lots of places for narrow necks of land there.

GT:  This is the one theory that I’m most familiar with. There were some reviews done on a website called Mormonheretic.org, and these were done back in 2008, so they’re a little bit dated. The website has definitely changed since then. My impression is the guy, and I wish I knew who it was that runs [bookofmormongeography.org.] He’s not a scholar at all. If you challenge him on anything, he gets really, really defensive. But being in New York/Great Lakes, one of the things about the Book of Mormon is it never mentioned snow or cold. I can’t imagine, especially being around the Great Lakes, there would have been a lot of snowstorms and even a lot of cold. I know everybody likes to say the Hill Cumorah is in New York.  You would think that they would have mentioned a snowstorm in the Book of Mormon. So, Sorenson and most other people think that it was more of a tropical climate. So, that’s another problem with the Great Lakes theory. As far as pros, it’s not a north/south peninsula, but it has several candidates for a narrow neck of land. The lakes could be reasonably construed as seas.  Limited geography is more appropriate than say, a hemispheric model.

058: What are the Strengths of the Baja Theory? (Rosenvall)

054: Book of Mormon on the Baja Peninsula?  (Rosenvall)

PrevPrevious EpisodeBoM Geography: From Middle East to Africa (Part 1 of 6)
Next ExpisodeBoM: South America, Heartland, Meso (Part 3 of 6)Next 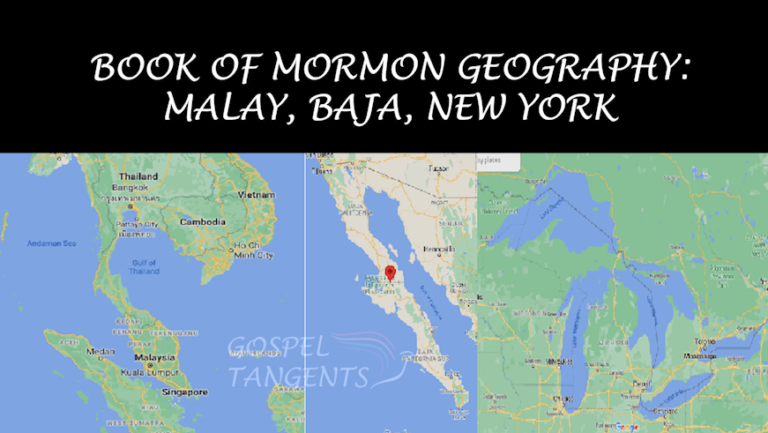