Intro to Malay Hypothesis (Part 5 of 6)

Table of Contents: Intro to Malay Hypothesis (Part 5 of 6)

Where did the Book of Mormon take place?  Most people think it is in Central or South America, or maybe North America.  However, we’re going to talk about the most unusual theory around called the Malay Peninsula, as in Malaysia, as in Southeast Asia.  It’s a very unusual theory.  It’s a fun theory, and we’ll find out more about how KC Kern and Greg Pavone got acquainted with this. 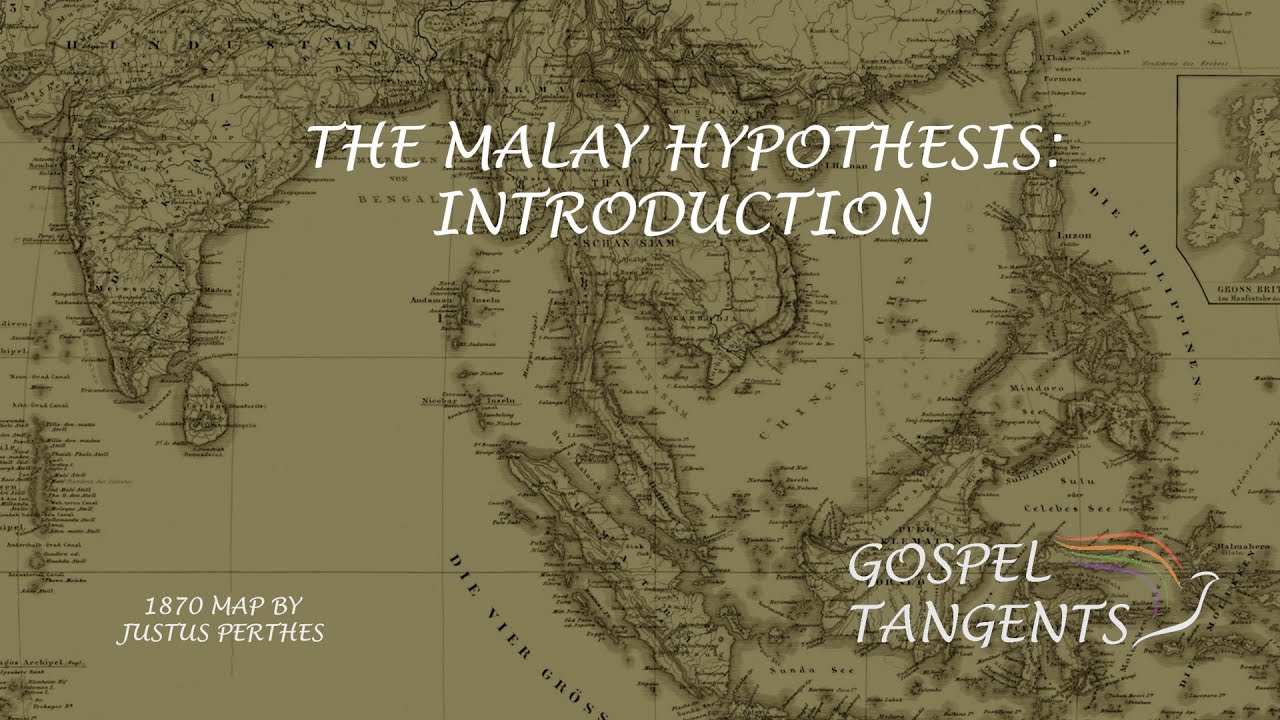 KC:  So, with that in mind, I encountered this [Malay theory.] I can’t remember where it was. Honestly, I think it must have been a blog post. I don’t know if it was on Mormon Matters, or the blogosphere circa 2006-2007. There was some comment about it. It’s like Malay theory.  Seeing [the comments about the Malay theory], it just did not register. I was just like, what the heck is this?  But [these comments] kept coming up. I’m like, “Why do you keep talking about the Book of Mormon in Malaysia?” This makes no sense.

GT:  That was my reaction, too, when I first heard about it.

KC:  It’s just completely bonkers. I’m thinking, “Why doesn’t this guy get banned?” Okay, so, I’m just like, okay, Malaysia, what are you even talking about? So I opened up Google Earth, and I type in “Malaysia.” And then Google Earth starts spinning—goes across the world, starts zooming in, and I see it.

KC:  I see this. [The shape of the internal map from Mormon’s Map]  It was a jaw-dropping moment.  It was like—how has nobody noticed this before? That was just the first impression. I started digging more, and then I came across Ralph Olsen’s work where he basically proposes that the Book of Mormon took place on the Malay Peninsula. The narrow neck and the land northward and the land southward, it all took place there. Now, Lehi and his family left the Arabian Peninsula and traveled the coast around India, the Bay of Bengal and then landed and stayed on the Malay Peninsula. That’s just so like, “Wait, what? No, the Book of Mormons is about America.” So, the first concession to make is, this is absolutely 100% incompatible with any traditional reception history of the Book of Mormon and that has to be established upfront.  You can’t make it work—pretty much at all. There’s no question that for Joseph Smith and early Saints and everyone—this was about America.

KC:  But, there’s one thing that I think is really worth noting. What I have found is, as I’ve looked into various geography theories, a lot of them turn into dead ends very quickly. What I have found is that the Malay one, has continued to be a fruitful line of inquiry, meaning that the more you press against it, the more it yields. Let me give two examples there. The Karen, like I said, they’re an ethnic minority in Burma, and they’ve had a lot of military conflicts with the Burmese Government. They’ve set up their own militia. In their history, and this is in the early 90s, there was this one confrontation where they had the stronghold around this oxbow lake thing on a river on the border of Thailand. They named that stronghold Kawmoora (Cumorah.) I kid you not. I read this in a book, and it’s just like all the Karen, their last outpost was Kawmoora. I’m just like [wow!]

KC:  If any of this, in any remote sense, was emerging from the Ohio River Valley, or from Mississippi or from Chiapas, Mexico, a lot of people would be making a lot of noise on the apologetic side. The other thing is after I published that article on the blog, I got a note from this guy in Kentucky. He said, “I can prove this theory true.” I’m like, “Okay, I’ll bite.” So, I respond, I get his phone number. I have a conversation and he says that there were some Karen students they were refugees in the U.S. in Kentucky. He was a shop teacher or auto mechanic and he had some [Karen] students that he was talking to.  He had somehow gotten his hand on the Caractors Document. Do you know which I’m talking about? The one that was copied by John Whitmer and may or may not have been the Anthon Transcript.

GT:  That Mark Hofmann made a forgery of it, too.

KC:  Right, or at least was inspired by that.  He [the teacher] supposedly had that, things copied from the gold plates. This Karen student looks at that and says, “Oh, I know this.  This is chicken scratch script.”  It was just like, what? Okay, what is this about? So, I look it up.  The proper name for the script is called Leke script. It’s unique to the Karen people. They teach their youth in these camps, how to how to write in this script. I contacted an expert in the script. There’s not a lot [of experts]. I gave them the Caractors Document and said to them, “Does this check out? Does this look familiar at all?”  The expert said, “Well, are many iterations of [the script]”  They had examples from the 1800s, and stuff like this. [The Caractors] would be coming from 500 or 400 AD.  It’s not going to be a match. But, they mentioned that there were certain characters that looked similar. At that point, it’s like—I know, Dan Vogel’s is like, “Oh, well, it’s just 1, 2, 3, 4, 5 in Arabic numbers and [Joseph is] just reconfiguring them.” The characters are simple enough and abstract enough that you can squeeze in anything, but just the fact that the aesthetic was—completely unsolicited—recognized by a Karen student, and made enough of an impact that they contacted me out of nowhere, in response to the article. It was just like [Wow!] This should not be happening. If this is completely nonsensical, we should not see any of this. And if anything like this was happening about Mayan glyphs, you know there would be entire volumes of apologetic works written about it.

Are you familiar with the Malay Theory?  What do you think of it?  Check out our conversation….

Don’t miss our other conversations with KC and Greg.

541: Clearing Out the Mormon Cave

538: Raiders of the Lost Mormon Cave