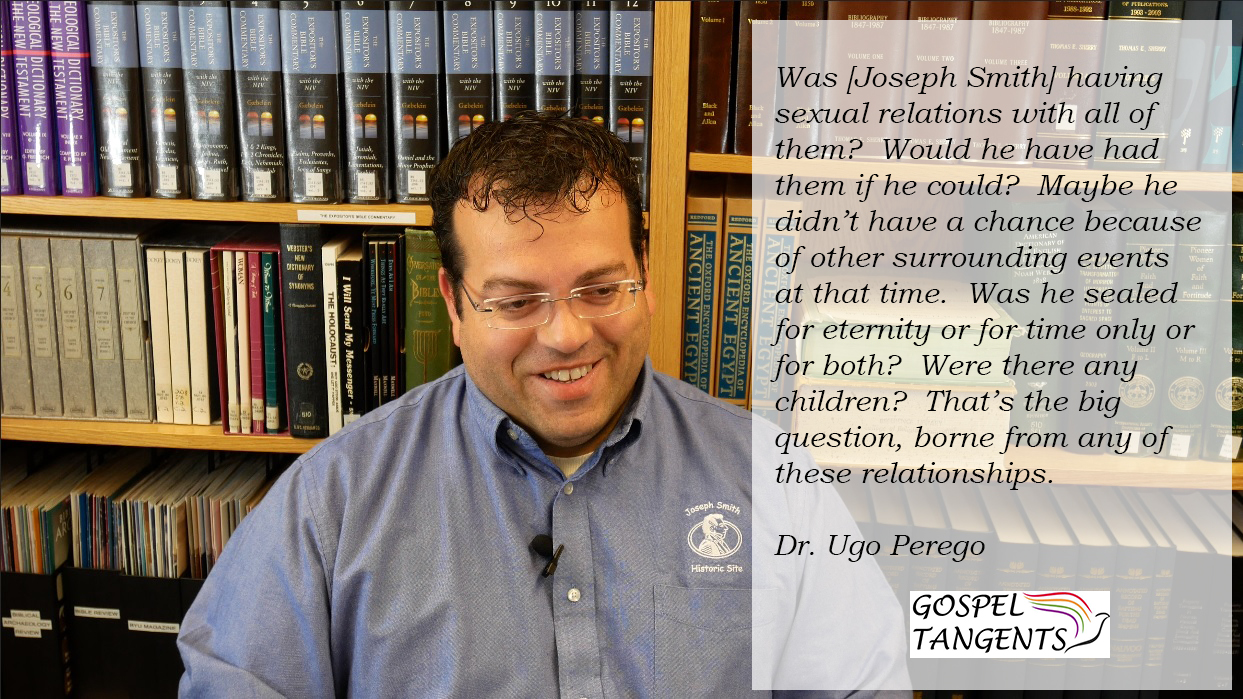 We’re continuing our discussion with Dr. Ugo Perego.  Before we look into the question of figuring out a 150 year old paternity test, what are his thoughts on Joseph Smith?

Ugo:  So there are still, even in the 21st century many individuals that do not fully embrace the image of Joseph Smith associated with polygamy.  They are totally fine with Brigham Young evidence [having as] many kids and as many wives as he wanted, but when it comes to Joseph Smith I guess unfortunately this idea that he was involved in a lot of things.

They have Joseph Smith on this pedestal which has kind of hurt individuals because he was a great man.  I believe he did extraordinary things.  The Book of Mormon is definitely one of the biggest miracles that has to do with the restoration, but at the end, the Lord purposely chose an imperfect, limited resources and capabilities individual.  Otherwise the greatness of the restoration has to be measured against Joseph Smith’s humble origins.  That discrepancy in my mind, you have to really think about this.  It doesn’t matter if you accept Joseph Smith or not, you have to do a lot of explanation to justify how somebody like him did what he did.  Then you have to faithfully accept that.

But then sometimes you bring Joseph Smith into the grayness.  You think that he had, as a human, he was immune to certain things which is not [true.]  He was not the Savior.  It was like Elder Bednar once said, referring to him and the Quorum of Twelve.  We are ordinary people with extraordinary responsibilities.  That’s how I view Joseph Smith.

Ugo also asks some interesting questions, and explains why Joseph may not have had children with these other women.

How many wives did he really have?  What type of relationship did he have with each one of them?  Because you have to take every single case individually.  There is too much evidence that shows that not all the unions he had were lived in the same way.  Was he having sexual relations with all of them?  Would he have had them if he could?  Maybe he didn’t have a chance because of other surrounding events at that time.  Was he sealed for eternity or for time only or for both?  Were there any children?  That’s the big question, borne from any of these relationships.  We know that one of the reasons to justify the practice of polygamy was to raise a righteous generation.  Definitely Brigham Young worked at that.  He had 50 more children.

Joseph Smith was fertile.  He had nine biological children from Emma plus two that he adopted, so he was definitely interested in posterity.  To some degree like Nephi, was very concerned about his posterity, what they would do and what they would not do.  But no one has ever been able to fully, up to the DNA era, to fully to come forth, we know that these other children was born of him through a polygamous relationship.

There has always been circumstantial evidence that would bring historians to make such claims.  So-and-so is probably Joseph Smith’s son or daughter because of a, b, and c.  Before Josephine, which is the last case that I presented, there are other cases that I am working on, but that’s the last one that we reached a conclusion, an answer.

How do you figure out 150 year old DNA test?

Modern paternity tests are quite different than ones where the potential father is long since dead.  How does that work?

I believe it was 2002-2003 when I started working on some of those cases.  Those cases only involved sons.  Josephine is a daughter.  There is a different approach that you must take genetically to answer the paternity of a son versus the paternity of a daughter when it is something that happened 150 years ago.  Nowadays if you suspect your child is not your child, regardless of whether it is a girl or a boy, you do a paternity test.  You test the mother, the father, and the child.  There are certain markers, there are autosomal markers they are called, that are very unique, the combination of such can only be reproduced within a family.  So either somebody is 100% not your child, or it is 99.99999% your child, which is just another way to say 100%.  DNA is one notch stronger in excluding relationships than it is to include.  There is always a little chance that DNA matches because of chance.  But the markers that you test are so many that the reality that there is really a chance is [close to zero.]