If you think racism is no longer a problem, think again.  In our final conversation with Joseph Freeman, he outlines continued problems he has personally faced over his life, including an experience with military police in which he came close to losing his life.

Joseph:  One thing to share when I was in the military, I went on a marine base, there in Kaneohe. As I drove my car in, they had officers’ parking spots were written on the ground. On our base, they were up on the sign. So, you’d see the sign, you’d know, okay, that’s an officer spot. Don’t park there. I didn’t realize that when I drove on their base, and I just parked my car.  I went and bought a hamburger. It was very close. My wife was then my girlfriend.  Her and another girl, they were sitting in the car. This MP came up behind us. He wrote a ticket. He didn’t ask us to move the car anything, just wrote the ticket. I think he was giving tickets to everybody that was in that line. There were probably more people than me that had made a mistake and parked in officers’ spot.  Anyway, the Provost Marshal came by and he was a major. He’s kind of like the guy that’s the head policeman. He saw me and he said, “Send that guy to my office.” Now I don’t know why he singled me out, but I was the only black guy that I saw out there. I’m not on my base. I’m on a marine base instead of the army base.

Joseph:  Well, I then go in to his office, which is still fairly close. He asked me a few questions.  “Why did you park there?” I said, “Sir, I didn’t know it was an officer spot.”  I don’t know today, if it was a general or colonel or what. But anyway, I shouldn’t have parked there. He says, “That’s what all you guys say,” meaning black guys. I said, “Sir, I’m sorry. But I didn’t know. I didn’t realize it was an officer spot.”  He said, “We’re going to impound your car.”  I had just bought this car, a little ’66 Mustang.

GT:  Wow. That would be worth a lot of money today.

Joseph:  Yes, I’m thinking, “You’re not going to take my car. But anyway, he sent me back out. Then he put an MP car in front of mine, and then one behind me to make sure I don’t get out, I don’t run.

Joseph:  Then they drove me down to another station, their main office. When they get there, they want my keys. I just said, “No, you’re not taking my car.”  I was ready to fight. These guys have got guns on them.  If I had fought with them, they would have killed me. But I said, because I was getting pretty upset with him. There were three of them and just one of me, and my wife and the other girl were in the car.

Joseph also shares the racism his children have experienced growing up here in the West.  Sign up for our free newsletter at https://GospelTangents.com/newsletter to check out our conversation…. 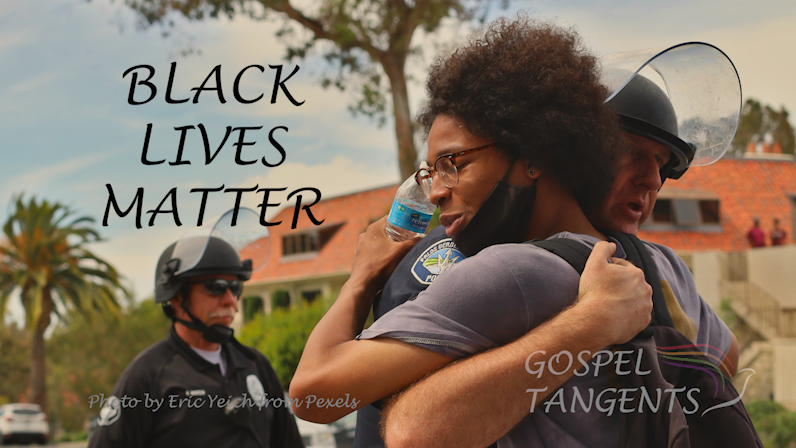