Mormons and most Christians observe Sunday, the first day of the week, as a day of worship.  James Strang taught his followers, on the other hand, that they should observe a 7th day Sabbath.  It turns out that  Strang had a revelation saying the proper day of worship was the 7th day, rather than the first.  What other differences are there in Strangite belief?

Bill:  Strang would teach that the Sabbath was changed from the seventh to the first day of the week by the mission of the Catholic Church. They did it through their power and they felt they had a right to make that change.  Strang is going to teach that the Sabbath is really important to us. We should keep the Sabbath in spirit and in unity and in studying and relaxation.  It’s not a crazy interpretation meaning you’ve got to pray all day or like this. You can feed your sheep if you have to, and things like that. But the idea was, it’s a day of rest and recharging.

GT:  But it’s the seventh day as opposed to the first day.

GT:  What I found really interesting from your book was the explanations why Joseph Smith didn’t keep the seventh day as opposed to the first day. Can you talk about that?

Bill:  I believe the interpretation is that Joseph Smith, in general, understood a number of things such as the sonship of Christ, Strang is going to say that he understood this or that he understood about the Sabbath.   I believe it’s in 1843, in the History of the Church, Joseph is going to say, “Some folks say I am a fallen prophet, but I say unto you, that you are not able to understand the things that you have brought forth….”  It was designated that Strang would bring forth this information a little bit in the restoration of the Book of the Law.

Historian Bill Shepard will tell us more, but the rest is available for free to our newsletter subscribers.  To subscribe, sign up at https://gospeltangents.com/newsletter and I will send you a secret link to hear the conclusion to our conversation with Bill Shepard!

Don’t miss out other conversations with Bill!

397: “The Other Mormons”-Intro to James Strang

Bill:  Strang is going to go to Kirtland, I think in September of 1846. They’re going to sweep Kirtland. The people are going to join him. They established a High Council of Presidency over there. Strang has keys to the temple, and so everything looks rosy.

GT:  Oh, wow. So he was really making inroads in Kirtland.

Bill:  Yes, in Kirtland and in the east, wherever he would go.  [For] the Mormons, this fit the bill, because this was primitive Mormonism.  Strang, in my view, unwisely dealt with some people that had been malcontents in Joseph’s church which was disastrous for his cause: John C. Bennett, William E. McLellin, George J. Adams, William Smith. So, in retrospect I would think he would look back and say, “Oh, why did I do this?”

GT:  Martin Harris, didn’t he join with Strang for a while?

Bill:  That triumphant mission of Strang out east, the three witnesses and most of the eight witnesses–now I realize that some of them would be dead–but they acknowledged Strang.  They acknowledged him. So for a brief instant, and I would say it’s very short, Strang is going to make these grandiose [claims.] He is attracting a lot of people.

GT:  People who didn’t like Brigham Young and polygamy.

Bill:  Right.  Exactly, and secret societies.  Any of that.  Many of them do not gather out to Voree, however. They choose to give their allegiance from a distance. Several things happened. One thing happened, I look at the picture, and the person did him the most damage was William E. McLellin. William E. McClellan had been cut off in 1837.

Were you aware of Strang’s early missionary successes?  Check out our conversation…

397: “The Other Mormons”-Intro to James Strang 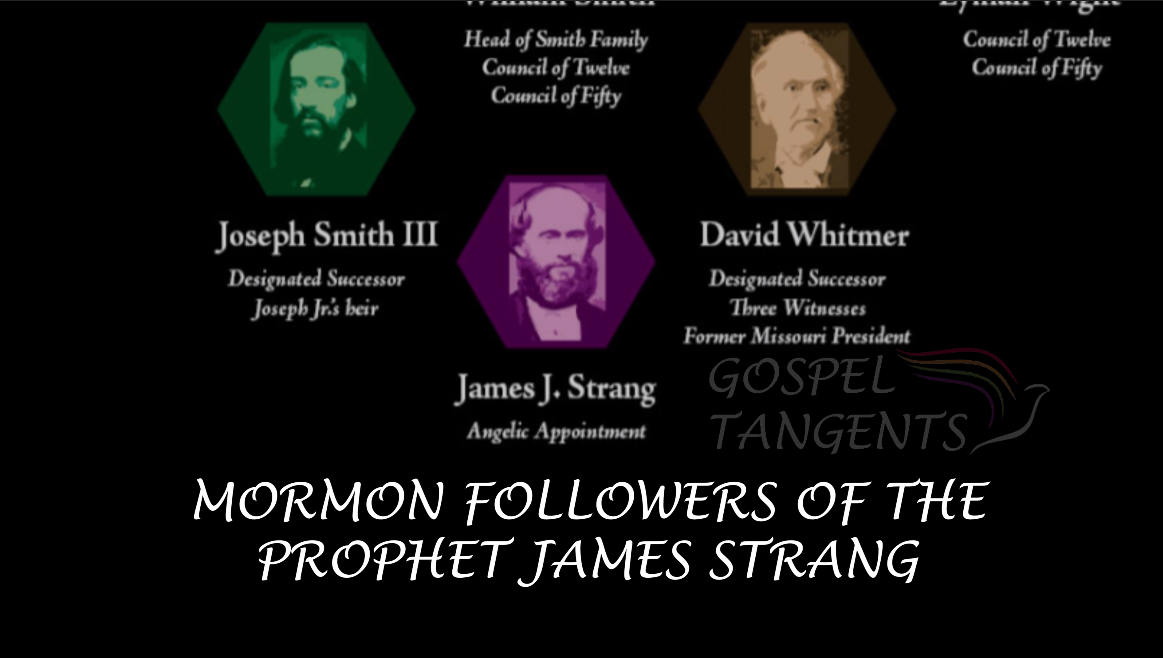 James Strang was one of the most unlikely people to succeed following the death of Joseph Smith in 1844.  Historian John Hamer will talk more about James Strang and his group, sometimes called the Strangites.

John:  Yeah.  Of all of the different people that could have emerged in the Succession Crisis, this is the one that would be most unexpected to anybody before Joseph Smith’s death because he had been a relatively recent convert.  He had been to Nauvoo.  Strangite recollections are that he had been baptized by Joseph.  He lived in Wisconsin, and so he wasn’t an insider in any significant way.

But what happens fairly quickly is that he announces all sorts of new prophetic signs, callings, and things like that that, or examples.  For example, there’s a new set of plates that are found by a new set of official witnesses.  There’s a new translation.

One thing he says, at the same moment that Joseph Smith is killed, an angel appeared to him and ordained him to be prophet, seer, revelator, and translator to the church.  There can only be one on the planet at a time.  So there’s not a thing where Joseph Smith can just give a bunch of keys to different people and then you collect the keys or something like that.  It only can be one guy at a time and it’s not because you can’t—if we ran out of elders in the LDS Church, you can’t have a deacon ordain some new elder, so Strang says you can’t have apostles ordain a prophet because that doesn’t make any sense.  You can’t a lower ordain [a higher.]  Essentially the only way, according to Strang, that you could have had a successor is the same way that Joseph Smith became prophet which is through angelic ordination, or two, there is a verse in the Doctrine & Covenants that says if Joseph shall fall, he will not have any power save it be the need to appoint another in his stead.[1]

So James Strang had a letter.  His interpretation of the letter is that it appointed him to be the successor, Joseph Smith’s successor.  It’s a little bit ambiguously worded in that way.  Also nobody who wasn’t a Strangite believed the letter was genuine.  So it’s a contested letter, but he used the letter also as a claim on the two fronts there:  there’s angelic ordination on the one hand, and he’s also been appointed the successor.

We’ll learn more about some golden plates that he translated.

GT:  Ok.  He also had some plates.  I think there’s The Book of the Law of the Lord,[2] and yesterday you talked about the Voree Plates.

GT:  Let’s talk about those.

John:  The first set of plates are the Voree Plates.

GT:  Oh that was the first set.

GT:  Oh I didn’t realize that.

John:  Yes.  The first set of plates that Strang announces are the Voree Plates and it’s just very interesting story.  I could talk about it for hours and hours.  But anyway the idea of it is that near Strang’s house in Burlington, Wisconsin in a place that comes to be known as Voree.  There’s a hill.  An angel in a vision, Strang says, told him where plates are buried.  He brings four guys to that spot.  He shows them where the angel told them.  They have shovels or whatever, and then Strang leaves.

So they dig up what I told you, they believe that the earth has never been disturbed and that they actually have to get under the roots of this big old tree and things like that.  They are convinced that the thing had been buried many, many years ago before this oak tree was on top of it and that kind of thing.

Anyway they dig up plates.  They are plates, though, that people physically see and it’s not simply the official witnesses who see.  Thousands of people see the plates including obviously lots of non-members including the local newspaperman who is the newspaper editor of the Kenosha newspaper and he actually goes on to be the guy that invents the QWERTY typewriter keyboard.  So that guy saw them.  He didn’t pass judgment on them or whatever.  He said some people thing they are pretty marvelous.  But the point is it was a physical artifact.

So Strang prints a translation of it through the gift and power of God.  He says that he able to translate these plates.  The gist of the translation is again, it’s a people that are killed off, just like the Nephites.  It doesn’t say Nephites, but anyway, a Native people that have died in a great battle at this spot again, but this spot is going to be a place of refuge that at some point or other the church, God’s people, are going to, the forerunner, essentially the first prophet Joseph Smith—it doesn’t say it in those terms, but I’m just going to read between the lines here, Joseph Smith is going to get executed and the people are going to have to flee, the first refuge, and so they’ll come to gather to Voree, the great successor is going to emerge.

Check out the video or audio to hear John talk more about his life.  Strang was also martyred, similar to Joseph Smith, and his followers suffered even worse persecution on the shores of Lake Michigan.   (Don’t forget to learn about another schismatic group, the Bickertonites in our previous conversation.)  Check out our conversation…..