We’re continuing our conversation with Dr. Newell Bringhurst.  We will continue where we left off and explain in more detail the Missouri Thesis.

Newell:  The Missouri Thesis is the argument that the origins of black priesthood denial go back to the Mormon problems in Missouri.  Missouri is a slave state and the Latter-day Saints go into Jackson County in the early 1830s, 1831-1832.  Most of them are from the north, they are northerners.  They are basically Yankees, people from the northern states so immediately there is a system of tension of tension between the Mormons/Latter-day Saints with the people that are there, have come there from the south and settled Missouri.  A lot of people have brought their slaves and so on.  There aren’t a huge number of slaves in Missouri.  During the Civil War it was a border state, but there was enough slavery that it was a legal institution in Missouri.

The argument of the Missouri Thesis is the Mormons coming in tended to be anti-slavery because they were coming from the northern part of the country.  Those that were there that had migrated from the south were pro-slavery.  So the Mormons could see that this was a difficult situation.  To try to strengthen their position in Missouri, they saw Independence, [Missouri] as a center place for Zion.  That was where they were going to gather in the last days in the early revelations [in the Doctrine & Covenants.]  They saw Zion and Independence where that was going to be the final gathering place before the coming of the Millennium and the end times.  It was very important for the Mormons from that point of view.

So the argument is that Joseph Smith felt it necessary to accommodate the pro-slavery position and the anti-black position.  In order to accommodate that they were willing to—especially as it became more difficult during the course of the 1830s, they decided that they would deny blacks the priesthood.

Lester Bush’s groundbreaking article discounted the Missouri Thesis and connected the priesthood and temple ban to Brigham Young rather than Joseph Smith.

Then Lester Bush comes along.  He’s doing a lot more intense research than Taggart did.  Taggart’s research is not thorough. In the meantime Lester Bush has been working assiduously on his study of blacks in the church, and he has been asked to write a review of Taggart’s.  It turns out that it is a review essay published in Dialogue in 1970.  His review essay is longer and more thorough than Taggart’s original book.  That’s the upstart.  I’m sure you’re familiar with it.  You’ve probably read both side by side.  There’s no comparison with regards to the thoroughness and the rigor of the sources utilized and the way that it was written.

Then of course Bush comes along three years, four years later with his definitive Dialogue article, Mormonism’s Negro Policy[1] that is the classic—the first real legitimately scholarly examination of the issue, the path-breaking article that we all, those of us that came after him, owe him a lot for:  myself, Armand Mauss, and all those who came after me.

Bush’s article was cited by President Kimball as being highly influential as Kimball studied the roots of the ban.  We also discuss some prominent slaveholding LDS Church leaders.  Check out our conversation…..

[1] The article is titled Mormonism’s Negro Doctrine:  An Historical Overview, and found at https://www.dialoguejournal.com/2012/mormonisms-negro-doctrine-an-historical-overview/ 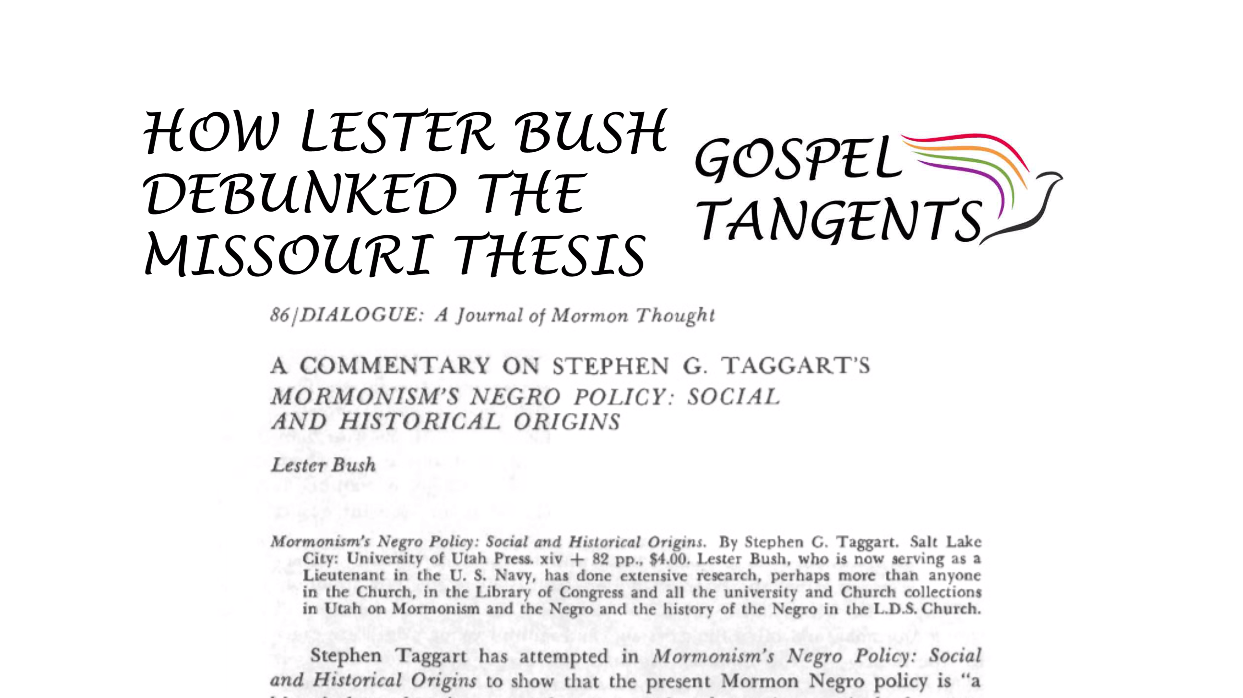