We’re going to take a deep dive into section 132 of the Doctrine and Covenants.  It deals with the Law of Sarah.

Anne:  Yeah, ok.  Ideally the Law of Sarah is the first wife gives consent for any subsequent wives.  If she does not give her consent then it says that the man is exempt from that law, which is the case with Joseph Smith.  Emma didn’t give her consent except for a couple of instances, so he was exempt from that law.  He could go ahead and take wives without her consent according to section 132, and I believe that’s the case.

GT:  So why have a law if you’re exempt from it?  Is that really a law?

Anne:  Well it’s an ideal law, if things were [ideal], but the thing is, if that were the case then the woman would have control over the family, who came in it, who he married.  This is a priesthood law.  This is not a matriarchal law.  The man is obligated I believe, and Ogden did, to try and be as patient as you can with the first wife and explain it to her, have a period of time where you are working with her if she’s opposing it, and then if it comes to a point where you can see that she’s never going to accept that, does that mean his exaltation is jeopardized because the first wife won’t let him live a celestial law?  That doesn’t make sense.  It’s a priesthood law, not a woman’s law.

GT:  I understand that.  A woman, most LDS women, I’m going to try my best to channel my LDS woman here, but they’re going to say, “Well look.  You’re telling me—to me the Law of Sarah, if a man can be exempt from the Law of Sarah, what’s the point having a “Law of Sarah?”  It’s more of an idea.  It’s ideal.

Anne:  No, it’s an ordinance.  In fact during the marriage ceremony she is supposed to put the hand of the future wife, the prospective wife into the hand of her husband.  That’s part of the ceremony. But if she doesn’t go along with it and is not going to be there, he’s exempt from that.  Otherwise, it just makes sense to me.

Anne:  Well my understanding of that is that they are “lesser wives.”  They are not covenant wives.  They are probably not eternal-type wives.  But I think there are traditions and customs in countries that God allows to happen.  They may not be His religious way of doing things, but he allows them to adhere to the customs and traditions of the country at the time.  I would assume it was something like that.

Abraham was building up a kingdom, kind of like, whatever the reason, God acknowledged that.  It’s not a religious thing necessarily.  We talk about the difference between civil rights and religious rights, they were civil ceremonies probably, probably.  I really don’t know how to explain that any better.

GT:  These concubines would have been for time only essentially?

Anne:  Yeah, correct.  Who knows if some of the others are going to be only for time too?  You have to be worthy.

Anne Wilde will give her perspective on these two important points in section 132.  We’ll also talk about the verses that refer to Emma Smith being destroyed if she doesn’t accept polygamy.  What does Anne think about this?  Check out our conversation….. 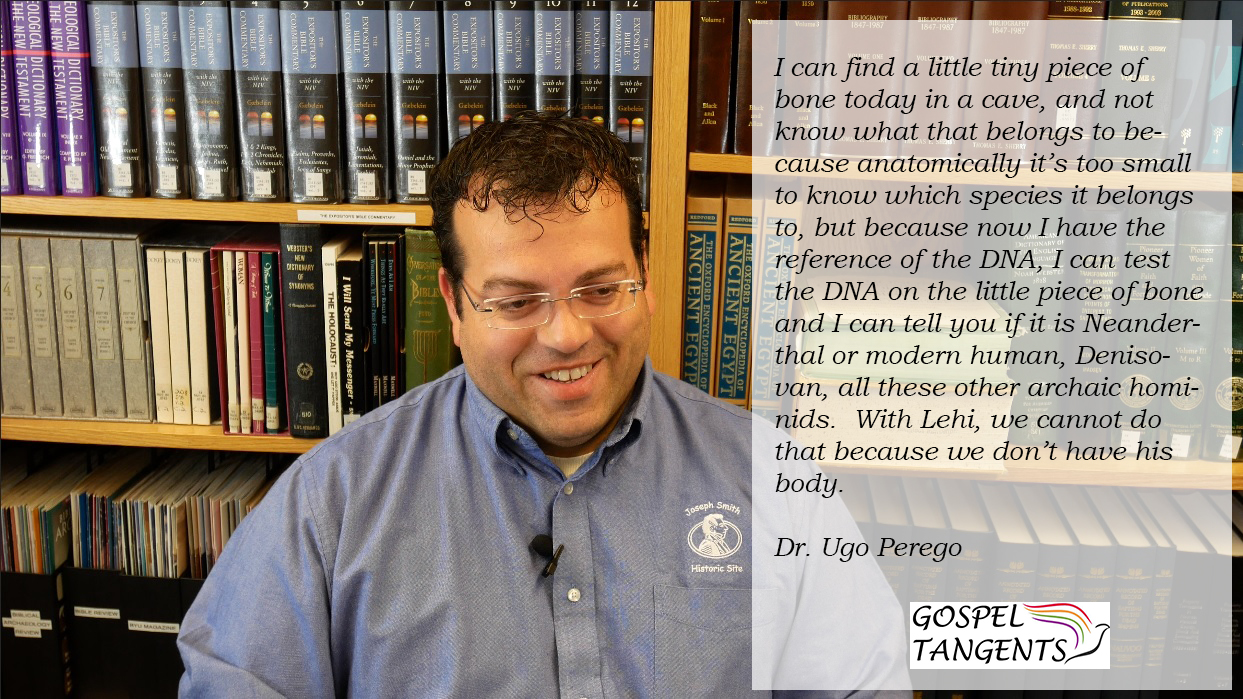 DNA & Book of Mormon: It’s a favorite topic of anti-Mormons because evidence seems to show that Native Americans came from Asia rather than from the Middle East as the Book of Mormon implies.  Dr. Ugo Perego is a population geneticist.  How does he explain this?  Would you be surprised that he talks about concubines?

So Lehi’s family comes.  They come from Jerusalem.  These people that are here come from Asia.  They are closely related genetically to Asian people.  Lehi’s family comes, 30, 40, 50 people.  There are the Mulekites that are coming too.  We don’t know how many.  We don’t know if they are a population isolated.  We don’t know if they mix with locals.  People say, “The Book of Mormon doesn’t say anything about others here, so they didn’t exist.”  True, but the Book of Mormon is also summary.  It is not a full record.  It’s what Mormon decided to put in there, and if its focus is to bring people to Christ, it’s going to talk about what people were doing to get ready or not ready for that.  It’s going to leave a lot of the details out.

This is first generation.  Is that possible that because they had the gospel and they encounter other people and then teach them the gospel and they become part of their group?  You go to Jacob chapter two.  Jacob, first generation in the Book of Mormon lands, how many people are there right now of that group, the original group?  How long have they been there?  In Jacob chapter two is frustrated with the Nephites for taking too many wives and too many concubines.  You have got a group of people that are what, 60-70, they are all cousins.  Where do you get these concubines from?  How are you satisfying your sexual desires with this?

Actually I’ve been doing some discussions lately with some other people around here, according to Israelite tradition, because in the Old Testament it talks about concubines, and Hagar was a concubine of Abraham.  The reference to concubine usually—you can take wives, multiple wives according to Jewish tradition.  They are wife as long as they are part of your same culture or your same social status.  But concubines are usually foreign women.  They do not have the same status as your family, so you treat them as some sort of wife, there is a legal binding, but they do not have the same status.  Could it be that the Nephites were doing the same, some foreign women, some local indigenous women?

GT:  Today with ISIS[1] in the Middle East, a lot of times they are taking these Yazidi women and they are basically sex slaves.  Is that kind of…?

Ugo:  Sex slaves, that’s another word for concubine.  It depends culturally where you are.  Sex slaves is probably the worst situation you can have.  I mean you are really there only to satisfy sexual pleasure.  Concubine has some rights as well.  In fact even today with Islam you can have up to four wives and as many concubines as you want but the problem is that when the husband dies, the inheritance only goes to the first four wives.  As long as the man is alive, the concubines have the same rights as the women, the same lifestyle or status, but then when the husband dies they don’t get anything.  They leave.

Then he says, in verse 4, Jacob 7:4 he says that Sherem was much learned with the language of the people.  Why would you have to make that reference about him knowing the language if he was part of the same group?  Why did he have to learn that language?

Ugo:  if there were really a lot of people here and Lehi’s group was very small, and there was as it looks like from these Book of Mormon passages that we talk about it, some sort of mixture, intermingling, their DNA would have disappeared within five or six generations.

What do you think of his explanation?  Was Lehi’s group so small that it is impossible to detect?  In our next episode, we’ll talk about the Lemba Tribe.  This is an African Tribe that seems to have Jewish DNA.  (We touched on this previously in our conversations with Jim Vun Cannon and David Rosenvall.)  Are there differences between the Lemba Tribe and the Lamanites?

[1] ISIS stands for “Islamic State of Iraq and Syria.” Taking advantage of the U.S. invasion of Iraq, as well as the Syrian Civil War, the group took over large swaths of land between 2006-2017 in Iraq and Syria, capturing, torturing, and killing local populations and forcing conversions to a brutal brand of Islam.  They have claimed responsibility for several high profile terrorist acts.