Welcome to Gospel Tangents, the best source for Mormon history, science, and theology.  I’m your host Rick Bennett.  Dr. Jonathan Stapley devotes an entire chapter in his book, The Power of Godliness, to baby blessings.  Given that baby blessings are not considered salvific, why spend so much time on that?  Jonathan says it was his favorite chapter of the book!

Jonathan:  There’s this exchange of letters between Joseph Smith and Oliver Cowdery and Peter Whitmer in Zion.  Whitmer is the ward clerk. He has a Book of Remembrance.  Book of Remembrance is the book that Adam creates. And so, he has this sacred document in which he is to inscribe the inheritance of Zion. And if you come to Zion, you receive an inheritance, that is your inheritance for time and eternity, while the earth shall stand and in eternity when it’s renewed.  When babies are blessed, their name is written in the Book of Remembrance and they receive this inheritance.  They’re essentially brought into this salvific community where salvation is no longer an individual affair.  But it’s not really an individual affair in Mormonism ever.  But this explicitly communal salvation, in Zion that’s just really remarkable and that Zion essentially fails.  The Zion project, burns, and the saints moved to Illinois. And we have the Nauvoo Temple liturgy and the cosmological priesthood that reorders the world and universe of Latter-day Saints.  We see the baby blessing becoming an annunciation of children’s sealed position in the cosmological priesthood.

Had you considered that?  Check out our other conversations with Jonathan. 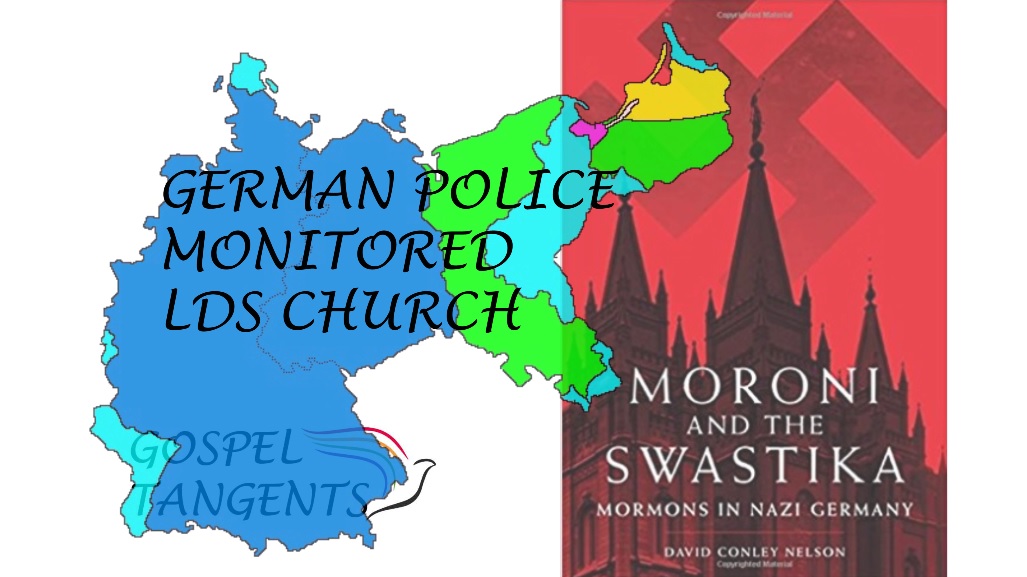 Today, December 11, marks the 76th anniversary since Germany declared war on the United States.  I’m sure that was a sobering time.  Dr. David Conley Nelson has written a book, Moroni & the Swastika, that details how Germans, as well as the LDS Church reacted to the war.  David has an interesting background.  He not only flies as an airline pilot, but has a Ph.D. in history as well.  He’s got some really interesting insights on German LDS history.  Did you know that the Whitmers, like David Whitmer and all those brothers that saw the Book of Mormon, spoke with German accents?

David:  Peter and Mary Whitmer both spoke English with a pronounced German accent.  Mary Whitmer, the mother, was born in Germany.  Peter was born in the United States.  Before they were converted to Mormonism, they were members of a reformed congregation.  Their first three children, their birth certificates are in German.  There has been a lot of German spoken in the United States for a long time.  There were official records in German language schools only up until about the First World War.

GT:  Here in the United States?

David:  So yes it’s not surprising that the Whitmers brought a lot of their German heritage with them and hung on to the language for a while, but eventually they were Anglophones.  But at least in their lifetime they spoke it with a pronounced German accent.

We’ll learn more about the Mormon Church in Germany and see if Mormons suffered persecution.

David:  In fact the Germans and the Prussian secret police were so effective that they knew when missionaries were dispatched from Salt Lake City in making their way to the east coast to catch a ship to come to Germany.  They knew because they had a secret police network among immigrants in the United States.