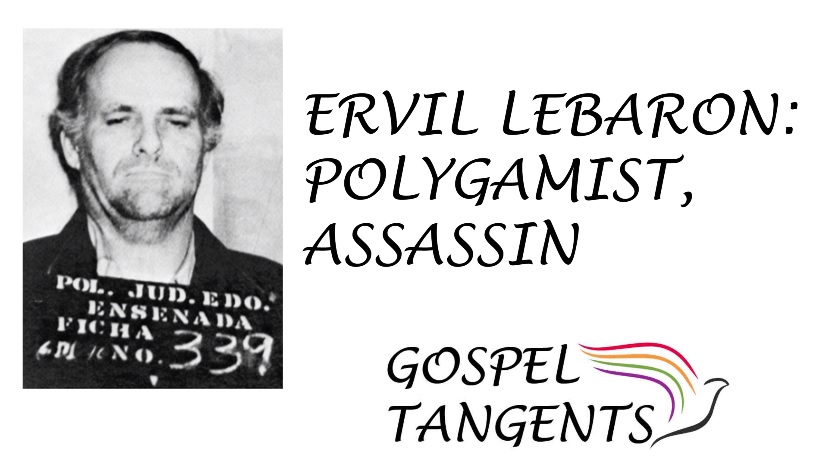 We’re continuing our discussion with polygamy expert Anne Wilde. We’ll talk about the infamous Ervil LeBaron: a polygamist and an assassin.  He was responsible of the deaths not only of his own brother, but other leaders such as the Apostolic United Brethren’s Rulon Allred.

Anne:  He is responsible for killing or the death of about 20 people, and I know that because I knew some of them.  Ogden[1] was introduced to him one time under a fictitious name and so we went out to a meeting and thought this was this guy’s name, Stilson, and lo and behold shortly after that we saw a picture, “Wanted: Ervil LeBaron” but was a picture of this guy that we had met.  He even stayed in my home under that other name.  Then when I found out who he was, I was a little concerned, but fortunately I didn’t know who he was at the time he stayed in my home.

[1] Anne was the second wife of polygamist Ogden Kraut.

Before we get to that,  She’s a polygamy expert, and we’re going to talk more about some of the smaller polygamist groups, such as the Kingston group and Harmston group.

GT:  Would it be safe to say that the AUB is probably the biggest group now?

Anne:  It’s the biggest one that’s in unity or in one name or whatever….  Don’t forget the independents!  That’s what I am.  I consider myself an independent fundamentalist Mormon and that’s because I do not belong to any other organized groups.  There’s about 12-15000, but they aren’t a group.

GT:  Oh so they’re the biggest.

Anne:  But they aren’t a group.  There are a lot that believe in keeping these eternal principles alive, not just plural marriage but others as well, as best as they can amongst the families.  They just don’t feel impressed, and I don’t, to join and be baptized into any of the groups.

You might want to brush up on the AUB, FLDS & Centennial Park too.  Check out our conversation…..