There are lots of troubling stories in scripture: the sacrifice of Isaac, the banishment of Hagar. I’m going to get personal and share some of my spiritual struggles with these stories with Dr. Christopher Thomas, a theologian at the Pentecostal Theological Seminary. How will he respond?

GT:  But, at any rate, the whole story about Abraham trying to sacrifice Isaac, that story just bugs me so bad. I know it’s supposed to be a [symbol for Christ.] Christians have taken that story and say, “Well, it’s like Christ.” Jews who have kind of rationalized it, “Did God really command Abraham?” There’s an ancient Jewish scholar that said, “Well, Abraham misunderstood, and it was an angel that was sent to Abraham and said, ‘Don’t do that.'”[1] If we look at Abraham’s day, especially, human sacrifice was common. If we look at the Book of Abraham, Abraham was going to be sacrificed, which is apparently an Islamic story as well. I’ve always wondered if there’s some parallel, if that Book of Abraham story is related to Islamic texts, because that’s in the Quran, apparently. But, at any rate, I would much rather follow the interpretation that Abraham was a product of his day. His dad tried to sacrifice him. He’s trying to sacrifice Isaac, because that was kind of what you did to show your devotion to God and that it was an angel that said, “No, Abraham, you’ve got to stop.” That was a bad revelation, or whatever. To me, that is much more palatable of an explanation than God said, “Abraham, go kill Isaac.” It just boggles my mind. And even that God would say that with Jesus, “Jesus, you’re going to have to die for everybody sins.” I guess if you go with the idea that Jesus did this willingly, and somehow His body is going to atone for billions, maybe trillions of people that have ever been born, [it’s really hard to grasp.] It’s mind boggling to me, and it still bothers me that God would require this. I mean, can you talk me down from the ledge here?

Chris:  No. I think we’re so close to the stories that their power sometimes escapes us. I have a friend who told me about her grandson who went to this children’s church, her two grandsons. She asked the oldest one, she says, “What did you learn today?”

He said, “Oh, we learned about Abraham and Isaac.”

She said, “Okay,” and so she asked the younger one. “What did you learn today?”

He said, “Was that that guy that tried to kill that kid, or murder that kid?”

I mean, I think we sanitize the stories, often.

GT:  I know.  I think we really do sanitize it.

[1] Rabbi Yosef Ibn Caspi (Spain, early 14th century) wrote that Abraham’s “imagination” led him astray, making him believe that he had been commanded to sacrifice his son. Ibn Caspi writes “How could God command such a revolting thing?”

Do you like the traditional interpretation of the Abraham and Isaac story, or does it bother you?  How can Christ’s atonement really work for billions of people?  Check out our conversation….

582: Protestant Theology in Book of Mormon?

581: Tongue-Speech in Book of Mormon 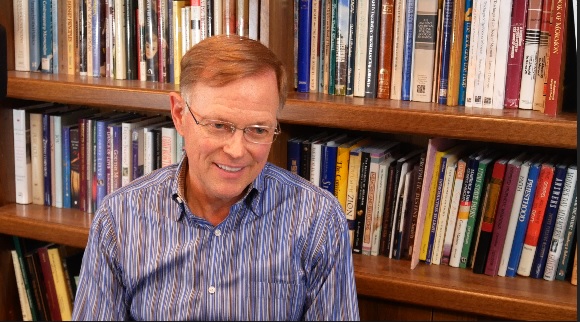 We continue are discussion with Dr. Brian Hales.  (Part 1 is here.)  He has written a comprehensive history of Joseph Smith’s Polygamy (Volume 1, Volume 2, and Volume 3.)  In this episode, I’ll ask him about Dr. Mark Staker’s claim that Black Pete may have been responsible for introducing polygamy into the Kirtland period.

Joseph knew the Old Testament, he knew Abraham had more than one wife and Jacob, so why would we need to think that it was Black Pete that was introducing this in a very real way, especially when Joseph wasn’t supportive of so much that was going on when he first arrived down there, and the types of spiritual experiences that they were expressing in their church meetings and things like that.  So I’m a little dubious on that, but I just applaud Mark.  I say go forward and let us know.

He also makes an interesting statement about the Joseph Smith Translation of the Bible.

I believe all of these principles came to Joseph line upon line, precept upon precept.  Some of the exciting things that are happening down at BYU, Thom Wayment and others are looking at the Joseph Smith Translation very carefully and discovering that it really shouldn’t be thought of as actual scripture in and of itself, that it was a chance for Joseph to expand upon the text to make the Bible text correspond with the theology that he was receiving through revelation, or through communications that he portrayed to be from God.

I asked Brian about differences in biblical polygamy and Doctrine & Covenants 132.

GT:  Well so I guess my question is as far as 132 and Genesis, does it seem to you that there’s a difference among those two scriptures as far as whether God commanded Hagar to be a plural wife or whether Sarah was totally responsible?

Brian acknowledges the accounts are different, but it doesn’t bother him.

Brian:  So for me to see the JST Genesis and that it doesn’t necessarily say what comes in 1843 doesn’t surprise me because of the line upon line, precept upon precept process.

What do you think about these different accounts about Hagar’s marriage to Abraham?  Does it bother you that these two accounts seem to differ in whether God commanded the marriage, or Sarah suggested it?

Does Polygamy in D&C 132 Conflict with JST Genesis?