There are some active Latter-day Saints who may be surprised to learn about Joseph Smith’s beliefs in magic as well as the connections between freemasonry and LDS Temples to be surprising.  Some will even deny the connection.  Is this something active, believing Latter-day Saints should be concerned about, or can these connections be reconciled?  Clair Barrus will describe how he reconciles Joseph Smith’s history which is surprising to some.

Clair:  So, when people come across uncomfortable church history truths or facts, it’s problematic because we’ve been raised on correlated history, and the internet now provides an opportunity to have unvarnished material to ingest. In the black and white paradigm in which the church presents everything: it’s true or false, it’s right or wrong, then then we have a problem, I think, or there’s a problem. It’s setting people up for a problem and a potential failure. I don’t think it will be that way several generations from now. I think the church is in the midst of trying to adjust to that. But [there are a] the scope of paradigms I don’t care for, and I think there are valid paradigms that work with Joseph Smith and all of these facts of church history that work well. But, black and white, true and false, all that, I think we need to reject that and say, “You know what?” Prophets are human, and they made some mistakes. The idea of a restoration of ancient truths–the way I like to look at it is that Joseph Smith was a brilliant prophet in that he was repurposing the raw materials of the esoteric and the questions about the divine and the mystic and the religious and he was a master at taking these raw ingredients that were right in front of him and building something better, something that spoke better to the people of his time.

So, we have this magic stuff. We have masonry. We have Christianity. I think Joseph takes these and builds something new out of them. I think that is the prophetic, revelatory, creative thing that Joseph Smith does. He builds that and then and then a little bit later, there’s more stuff that is informing him and more building blocks are suddenly visible to him and he takes those and synergistically builds something out of that, and on and on and on. It’s couched in the terminology of restorationism, restoring ancient truths. And perhaps it is, but I think that another way to look at it is that it’s building. It’s using the raw materials to build Mormonism that speaks to people, that helps them reach to the divine to answer the questions that everybody has asked from antiquity. Joseph Smith is providing potential answers for us and helping us as we seek to try to try to figure out what’s going on this planet. Why are we here and what in the world is going on? So that’s kind of how I see it.

So the Masonic Temple connection, to me that’s a repurposing of masonry into something that is more in line with the vision that Joseph Smith continues to uncover and build as he goes through his life.  This is the latest building and refashioning something from his environment into something new that spoke to those people.  And it speaks a lot to a lot of people today, and I think that’s a better way of looking at these things.

Is that how you see it?  Check out our conversation.

Don’t miss our other episodes with Clair! 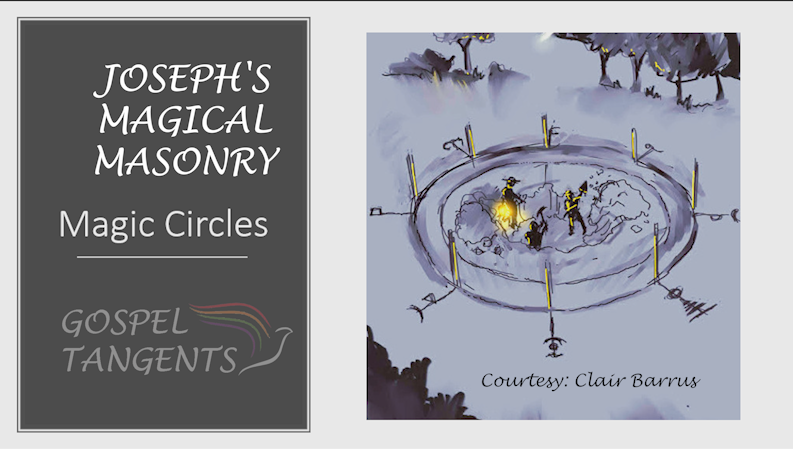 Historian Don Bradley made some waves in my previous interview when he said there were masonic implements with the Gold Plates.  It turns out that Clair Barrus has some similar beliefs, and we will talk about masonic legends and golden plates.

Clair: Lucy Mack Smith writes about this. She says, “Joseph said, ‘Do not be uneasy, mother. All is right. See here, I have got a key.'” He calls it a key. “I knew not what he meant. I took the article of which he spoke into my hands and upon examination found it consisted of two, smooth three-quarter diamonds set in glass. And the glasses were set in silver bows.” This is Joseph Smith’s translating device, but he calls it a key, the same word that is used in the Royal Arch Masonic myth. The high priest puts on a breastplate, uses the key, and he translates the characters that were originally from a gold plate. So I think there’s something going on there. I think this may be what inspired Joseph Smith to go on and allow Mormonism to come forth.

GT:  So you think there’s a Masonic connection to the origins? The origin story of the golden plates? Is that [right]?

Clair:  I think so.  I think that at some point Joseph shifts from a common treasure-seeker to a restorer of ancient scripture, buried scripture written by ancient prophets.

Clair:  I think that story and then the idea of how do we translate these and what do we even wear while we’re translating it? I think that also comes from masonry.

What are your thoughts?  Check out our conversation…