We’re continuing our conversation about the Hofmann bombings.  This time we’ll talk about the short court case against Mark Hofmann.  It wasn’t much of a case, just a preliminary hearing.  Curt Bench tells us that he was initially skeptical about police reports that Hofmann was the bomber.

Yeah they were convinced but it took a long time to convince me and others that he was guilty.  He was our friend.  He was a guy we had known and done business with for years.  Your friends don’t kill people, and there was no talk then of forgery or nobody knew about the financial schemes or him being a con man or anything like that, so that was all to come.

Curt also tells how he became an unknowing participant in Hofmann’s fraud.

I showed Mark this Book of Common Prayer which was no big deal, but he said, ‘well I’ll give you 50 bucks for it.’  [I thought] I don’t have a customer, I might as well.  Later he said, ‘you know there was some writing in the back of that appears to be Martin Harris’ so I’ll give you a couple thousand dollars for it.’  [This was] after he had already given me $50 for it and that was fine because I didn’t know.  So I thought, ‘gosh that’s really quite fair.’  So what turned out that he’d done…

GT interrupts:  So you didn’t question that Martin Harris was in there.  You just thought you missed that?

Check out this episode!  You’ll hear Curt Bench will tell us about how he spoke at the Hofmann Bombings preliminary hearing. (Don’t forget to check out (parts 1, 2, 3, and 4!)  Check out our conversation… 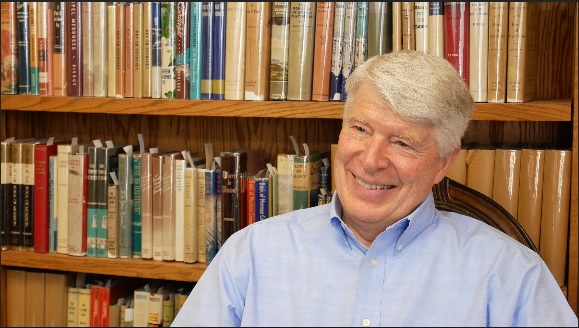 Steve Christensen was killed on October 15, 1985 when he picked up a package outside his office.  It was a pipe bomb and it blew up with a bunch of concrete nails killing him instantly.  It was a horrible scene.  Curt Bench describes how he found out about it driving to work and that he immediately called his friend Mark Hofmann to warn him about a bomber out there.

A few hours later Kathy Sheets also picked up another bomb from Mark Hofmann and she was killed instantly.  Her husband, Gary Sheets had been partners with Steve Christensen.  Many wondered if this was a financial deal.  Was it a mafia plot, or was it something to do with Mormon documents?  Both men had experience with those.  Let’s listen in as Curt Bench tells us about how the news unfolded to him.

Curt:  I talked to Mark on the phone, the day of the bombings.

Curt:  Several times, probably six or seven times.  I called first to warn him about the bombings, well bombing at that point because there was already a lot on the news.  I was actually driving to work that morning and they said there was a bomb that had gone off in the Judge Building.  It was just a few blocks from where I worked.  They even as I recall gave the office number and it said a businessman had been killed.  I only knew one person in the Judge Building and that was Steve Christensen, so as soon as I got to my office at work I looked up in my directory and pulled up his name and there was that office number at the Judge Building and I was just sick physically.  I mean it was just horrible.

I got the answering machine and I said Mark, this is Curt.  This is an emergency.  Please call me back immediately, as soon as you get this.

A short time later he called, and just kind of light-heartedly said, Curt this is Mark.  You said it was an emergency but then everything’s an emergency with you, just making a joke.  Then I told him what had happened, that Steve Christensen had been killed and there was a sharp intake of breath, “What?” like he was genuinely shocked.  I told him everything I’d heard.  It was as if he’d never heard a thing.  I warned him and told him to get his family out of the house, to get into hiding, whatever because we didn’t know what was going on.

Curt:  And that very day there was speculation about, did it have something to do with Mormon documents, because Steve had been in the news.  I’m trying to remember about the news part.  Certainly it was known he had been involved in trying to get the Salamander Letter.

GT:  So you made the connection that you thought it could have been?

Curt:  Well it could have been.  Yeah there was speculation early on about was this business related, because there were angry investors with the Sheets company, CFS.

What are your reactions to the bombings?  Do you remember them?