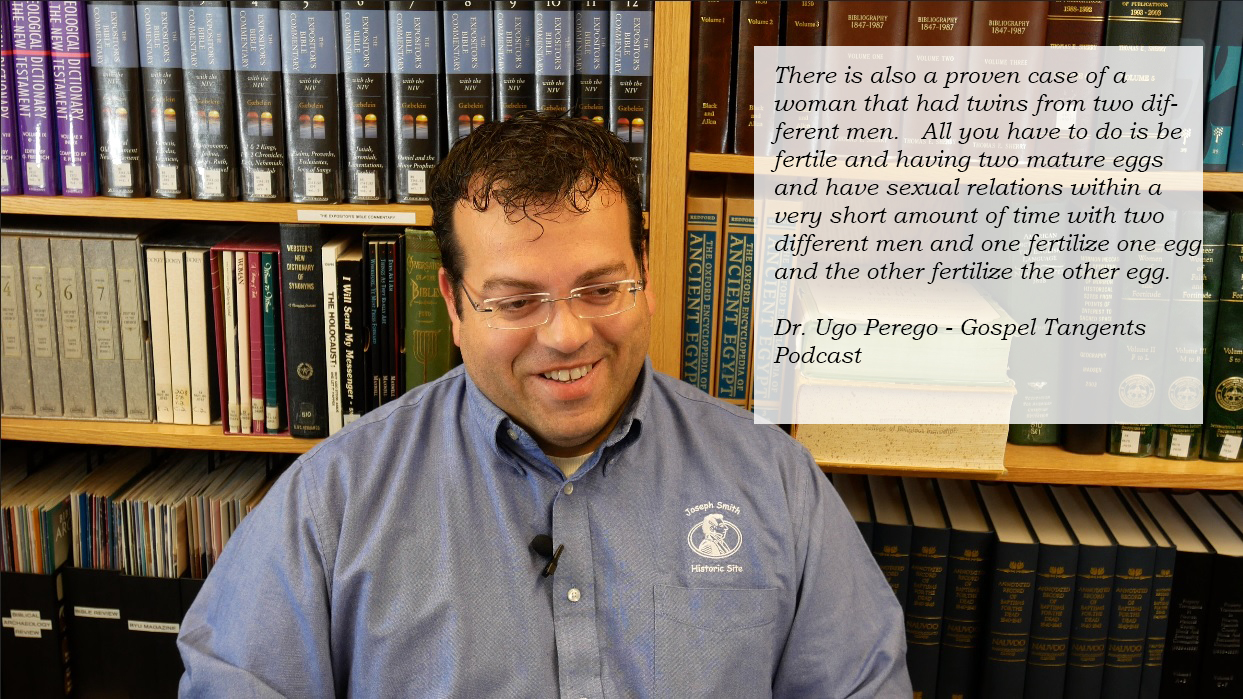 I’m excited to introduce Dr. Ugo Perego all the way from Italy.  This is going to be the first of several conversations where we’re going to talk about DNA.  You can think of this first episode as DNA 101 as we learn a little bit about DNA science, but we will continue to learn more about this big topic over several episodes, so don’t think you’re going to learn everything today.  In our first episode we’re going to get an introduction to Dr. Perego, how he learned about DNA, his mission, and his education.

Ugo:  I’m a native of Italy of course.  I lived there all my youth.  I came to the [United] States when I was 21.  I served a mission in California.  That’s when I first learned English, and I’m still in the process as you can tell.

After my mission I went to BYU.  I came here to the BYU campus.  That’s where we are today.  I did my bachelors, my undergrad here in health sciences, and also did some other studies in scriptures and seminary teaching.  I did other things when I was here.  I got married.  My wife is from Missouri.  I lived here all my married life up to five years ago.

I worked for a large project, a worldwide project for 12 years after my schooling, for the Sorenson companies.  Our objective was to collect DNA samples and link them to family history, and build a large database of correlated genealogical and genetic information, help people trace their past, their history, connect to others through DNA whenever the paper trails would not be sufficient to provide those links.

As I did the work for them during those 12 years, a byproduct of that research was a tremendous amount of data that could be used for population studies.  I’ve learned more about the origin and relationship of different populations, not just individuals.  We had such a variety of data in this database.  During this time I had opportunity to do Ph.D.  I did with professor Torroni.

For those in the field, he’s the first person that used mitochondrial DNA to identify or differentiate a group of people, populations.  In fact the first group of people that he studied were Native Americans back in the early [19]90s.  So he was my graduate advisor, my mentor.  I did my Ph.D. dissertation on his suggestion.  It wasn’t the actual project that I had proposed to him.  I had another project in mind, but he actually wanted to take the one study that he did. It was a post-doc on Native Americans because he wanted to do that using more advanced techniques.  About 20 years have elapsed between the time he did the work and the time I was doing my Ph.D.  So my Ph.D. dissertation was on using this model, more advanced technique to be able to trace the origin of Native Americans through DNA.

So that’s a little bit where my studies are.  I have a Ph.D. in genetics and biomolecular sciences.  That was my Ph.D. dissertation.

I also asked him how identical triplets can have different ancestry.  How does that work?  (It’s not a simple discussion.  You’ll have to listen to hear his explanation.)  He also tells about an unusual case of twins!  Check out our conversation…..

Ugo:  There is also a proven case of a woman that had twins from two different men.  All you have to do is be fertile and having two mature eggs and have sexual relations within a very short amount of time with two different men and one fertilize one egg and the other fertilize the other egg.

GT:  I’ve never heard of that before.

Ugo:  It did happen.  So the woman becomes the vector to bring to life two brothers from two different men.  It’s very unusual but we have a case of that.

What do you think?  Did you learn anything?