The LDS Church prohibited black men and women from receiving priesthood rites in the temple until 1978.  Should the Church apologize for past racism?  Emmy award winning director Loki Mulholland will weigh in on that issue.

Loki:  The Church already is doing, believe it or not, work and reparations, in the respect of the work that they’re putting forth and the resources for the Freedmen’s Bureau and so forth, and the economic help that they’re providing in cooperation with NAACP, and doing these things. It might not be the reparations people want to see. But, I think there is something there, by the way. But what’s the harm in apologizing? This is a political issue at that point and regard. So, the reason the U.S. doesn’t apologize for slavery is because then that makes them accountable. Congress doesn’t apologize, because once you do, then you recognize that you’re actually accountable. Well, don’t we actually believe in fixing mistakes? Don’t we actually believe in that sort of stuff? Isn’t that the whole principle of the Gospel?

Loki:  First, you have to recognize it as a sin. So, a wrong was done. President Oaks is a lawyer, so let’s just be fair, and we all know that.  I don’t mean to say anything bad about lawyers.  At the end of the day, if a wrong was done, then yes, we need to apologize for that wrong. Then, okay, well, how do we fix that? What does that look like? Sometimes it’s just an apology. There’s nothing wrong with apologizing, even if you don’t think you’re wrong. If someone else was injured, you might not have meant it. That’s not what your intent was, but you apologize for some of the simplest things. In this regard, why not apologize. I just don’t understand why that wouldn’t be the case. We’ve pretty much come out and said this wasn’t a Church policy, but we allowed it to continue. My understanding is there’s no written document anywhere saying that blacks shouldn’t have the priesthood. There was nothing at the pulpit, the proverbial pulpit, if you will, in General Conference.

Do you think the Church should apologize for the temple and priesthood ban?  Check out our conversation….

531: Can White People Talk about Racism?

Let’s face it.  Race is a tough subject to bring up.  Is there ever pushback from black people when white people talk about racism?  We’ll talk about white people leading conversations about race with Emmy award winning director Loki Mulholland.

Loki:  I mean, this is just to fair, because racism is a white person’s disease that we keep asking everyone else to solve. Now, there’s a lot of emotion involved in this, a lot more emotional investment for African Americans than it is for white people, clearly.  So, that’s going to come out from some people.   Again, they’re entitled to those opinions. But, yeah, you can feel like you’re getting piled on or whatever else, but why be in the game, if you’re just going to quit?

Loki:  People ask, “Do you ever get pushback from black people?” I’m like, “No, most pushback that I get is actually from white people.” There are some people who aren’t happy with me that are African American, I’m sure. That’s all right. There are people who said–look, there’s African Americans who aren’t happy with my mom. Good grief. That’s all right. But, that’s not all black people, just like, not all white people are racist, for goodness sakes. It can seem like that, but not every black person is an angry black person, either.  Even though the white people, anytime a black person says something oppositional or questions somebody, [a white person might say,] “Oh, well, they’re an angry black man.”  People go, “Well,” I get people like, “Is it unfair for you to be hired to talk about diversity inclusion? Who are you to talk about diversity inclusion.” I’m like, “Well, [I was hired] because they’re not going to listen to you, if you’re black.” Trust me, white people don’t listen to black people. If they’re talking about racism, they’re definitely not listening to that. Because, one, we go, “They have an agenda, because they’re black.”  It’s racism, so, of course, they have an agenda.

Loki:  There’s more of an inclination for a white person to listen to me talking about it, because also my mother. I get that little, I don’t want to call it a trump card, because I don’t curse. But, I had that little card. I can play my mom card, because she’s a civil rights activist. People can see that. There’s something to be said about that. It’s not for African Americans to go, “Oh, my gosh, thank goodness there’s a lot of white person who’s actually a decent human being,” like my mother. It’s for white people to go, “Oh, I didn’t know we were involved in the civil rights movement. Wow.” It’s something to stop and think. This wasn’t just a black issue. This is an American issue.

The LDS Church has had a rough history when it comes to race, so it may surprise you to find out that one of its members has made several award-winning documentaries, including an Emmy dealing with racism.  We’ll talk about these award-winning films from director Loki Mulholland.

Loki:  “An Ordinary Hero,” which is about my mom, and the student movement. Then, there’s “The Uncomfortable Truth,” which is about the history of institutional racism in America, how we got to where we are. That’s actually a genealogy journey, as well, very fascinating. I get messages from people asking me about–all sorts of questions about that film still.

GT:  Well, and your family had owned slaves, right?

Loki:  I say that a little cheekily, sacrilegiously, but the fact of the matter is, I get people who tried to argue that I’m not a real American, blah, blah, blah. I’m like, “Hey, wait, hold on. Hold on one second, now. We fought in every war. Right? We did all of it, we did everything. We were there for all of it, the good and the bad.

Loki:  “Black, White, & Us”  is about racism through the lens of transracial adoptions in Utah. So, these were white families who believe that racism doesn’t exist anymore, and then they adopt these black children. It’s like this eye-opening experience for them. Because now suddenly, their neighbors, their own family members, everyone else is coming out of the woodworks saying all sorts of stuff to them. But, they actually have to confront racism, because these are their children.  They can no longer sit there and go, “Yeah, but maybe that’s not what the police meant when they pulled you over, and maybe this and maybe that.  Maybe that’s not what your teacher said.”  And it’s like, “No, I mean, this is actually for real.” It’s a fascinating exploration.

Loki:  Another film is “After Selma,” which is about voter suppression since the 1965 Civil Rights Act. So, Selma, Alabama, the Edmund Pettus Bridge, that has iconic images.  People are like, “Oh, well, everyone can vote.  All as well.” Well, no, not all is well. There’s still a lot going on. So, that’s that film. Then, obviously, the “End of Slavery,” and “The Evers.”  This is about the family of Medgar Evers, and his assassination. He was shot in the back by Byron de la Beckwith while standing in his driveway. We interview his wife and his kids and so forth.  We have to understand that these historical places, actually, these people are still alive in a lot of cases when it comes to civil rights movement. These are real stories, these are real people, real lives, real impact. So, when you go and see their house where he was killed, it’s not just merely, “This is an historical place.” It’s like, “No people lived here. They laughed. They loved. They cried.  It’s making history real.

Have you watched any of these films?  Check out our conversation…. 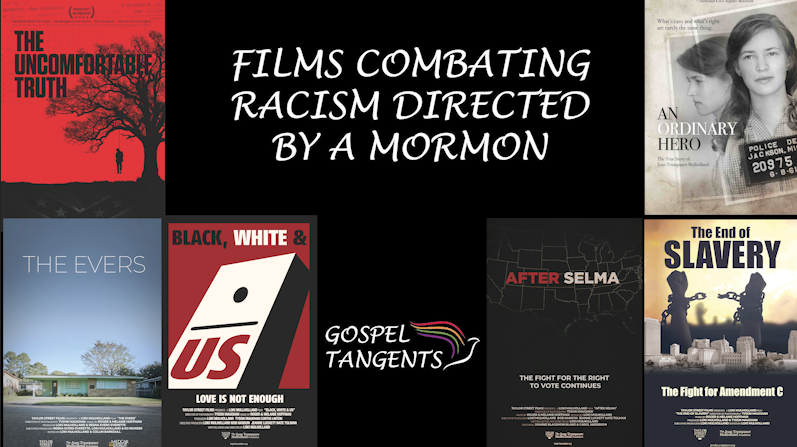