In this last episode with Dr. Bill Smith, we’ll cover the other issues from his book on section 132.  We’ll talk about the evolution of doctrine about how spirits are created.

Bill:  There’s another issue we didn’t talk about and that’s the protological impact.  When I say protological, I mean the theology of the beginnings.  Where did everything start, king of thing?  Revelation impacts that, not directly.  It doesn’t talk about that.  But the way people interpreted that or developed the surrounding superstructure of thought around it, that’s a very important issue.

Because Joseph lays out a protology in Nauvoo.  He is really talking about the nature of the soul.  The soul doesn’t begin anywhere.  It’s always been around.  This sort of conflicts with the idea that develops out of the revelation that souls are spirit babies that are born in heaven through heavenly sex.  This is a really important issue that surrounds the revelation.  How do we reconcile these two theological protologies that develop out of Joseph Smith’s Nauvoo teaching and then out of the subsequent teaching of the revelation about polygamy and all of this?

If you missed any of our previous episodes with Bill, please check them out!

139: Was Oliver Cowdery a Polygamist? (Smith)

138: Emma’s Up & Down Relationship with Polygamy (Smith)

136: Dr. Bill Smith on the Origins of Polygamy

In a previous conversation with Dr. Bill Smith, we talked about how polygamous sealings were considered nearly permanent.  There are cases in which those can be broken.  After Joseph Smith died, Brigham Young claimed sole possession of the sealing power. Many apostles disagreed. How did it get resolved? Dr. Bill Smith explains in this interview. Does more than one man hold the sealing keys? And who is in charge of breaking sealings?  Is it just one man, or are there several people who can do it?

Bill:  Which is in perfect harmony with the idea that sealing.  You could do it and you could undo it.

GT:  As prophet he had power to loose.

Bill: Yes, so that’s another big point in the discussion of the book is that in the revelation it’s very clear that only one person at a time has this authority to decide you can be sealed, you can’t be.  Or, you can engage in polygamy, you can’t, kind of thing.  This has all evolved onto a single person.  It even says historically, this is the way it has always been.  I don’t know how serious to take that, but it supports the idea that it’s really a one-man job.  So, who has the authority to decide?  This is a huge issue in succession.  Because obviously the guy who has this one-man authority is the guy to be in charge, right?

At one point, Joseph tries to separate his church presidency from his temple priest position as the one guy.  People don’t like this.  They are worried about it.  They don’t want to accept Hyrum as the church president and Joseph as saying.  Unfortunately, he is addressing a group, a very small group who is acquainted with his temple theology.  The people who aren’t are really upset by this.  “We don’t want Hyrum to be the prophet.  You are.”  He can’t be the prophet.

So, he takes it all back that afternoon.  But yes, he is really speaking to this idea of where things are, and I can’t go into the background here, but his sort of presidency of the High Priesthood sort of vaults him into the position of the one guy.  So, after he has died, after he is dead, the apostles weren’t in that tradition of High Priesthood. They weren’t in there at all.  They try to write themselves in at first, and then they say you can’t really do that.  It doesn’t work.  So, we have to a new tradition about this.

Is adultery grounds for breaking sealings?

Bill:  Adultery is a really touchy point within the revelation.  It’s a little bit confused.  Also, the whole thing is tied up in this idea where I mention in Matthew about the binding and loosing thing.  That is sort of Mark Staker’s thing about Peter, James, and John.  That’s connected in there.  So, the text is not perfectly clear.  That’s another point I try to make about the revelation. 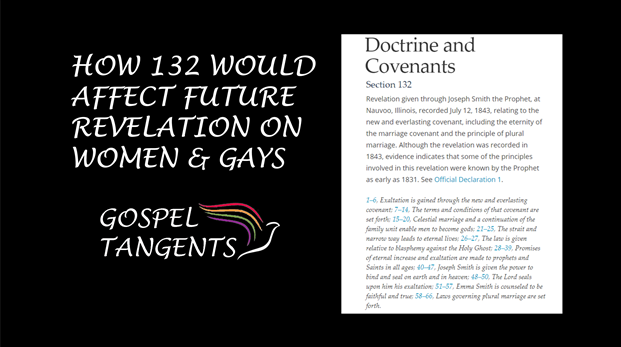